In December of 2004, a nightclub bouncer named Shawn Obasi stepped into the ring at NYC's Underground Combat League weilding heavy hands and crowd-pleasing intensity. But those attributes were all he had, and the 250-pound Grados Wing Chun representative lost via TKO after nearly seven minutes of fevered scrapping. Fast-forward to the present, where, with grappling knowledge courtesy of Alliance Jiu-Jitsu in Manhattan, the Nigerian-born Bronx native has put himself back on the winning track - first by pounding out one BJJ stylist and then tapping another with a kimura. Obasi is now kicking ass. "I definitely had to focus on my martial arts training and learn all aspects of fighting," he says. "Not just stand-up but groundfighting as well. Before that first fight I had no idea who the Gracies were and Brazilian Jiu-Jitsu and submission wrestling - really, any other kind of fighting other than what I did." What looms on the horizon for the up-and-coming heavyweight eager to turn pro? "My goal in mixed martial arts is to be number one," says Obasi. "My goal now is to win." 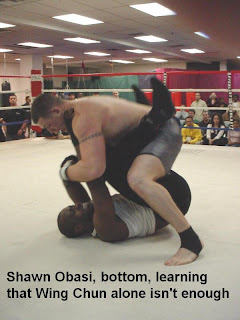 It was an interesting fight! And Obasi and Chun strong opponents, but winning is better ...

Easy to leave this position.