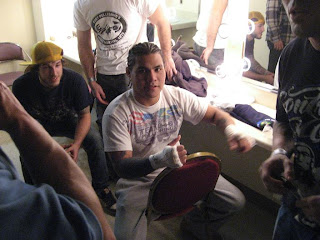 Tomorrow night's UFC will feature the debut of Pat Berry, a New Orleans-born heavyweight kickboxer and student of Ernesto Hoost. And while Berry will have all the usual weight an Octagon rookie has on his shoulders, he'll also be carrying a bit more. "It's tough being the son of someone famous," says Berry, whose father, Franken Berry, is the spokesperson for the well-known strawberry-flavored cereal of the same name. "I mean, people hear 'Berry' and they think breakfast. I need to change that. I want them to think UFC champ." Berry's first bout in the big show will be against Norwegian fighter Dan Evensen - a noted scrambled egg eater and enemy of sugar-sweetened cereals. "It doesn't bother me," says Berry. "I'm there to fight. I'm there to let the world know that Pat Berry can kick butt." Adds the K-1 and WCL veteran: "It ain't about food or my dad. It's about me."
Posted by Jim Genia at 8:58 AM No comments: 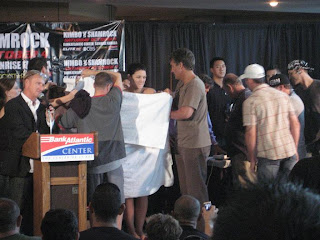 The final UFC of the year and boy is it a doozy. The main card is star-studded and the under card is packed with more than a few top contenders - which is a pleasant departure from the often anemic cards the promotion has been putting out of late. Some predictions: