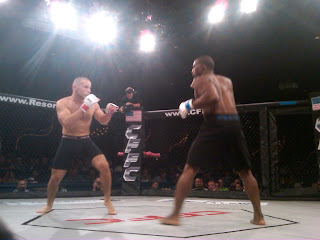 Sent from my BlackBerry® smartphone with SprintSpeed
Posted by Jim Genia at 9:11 PM No comments: 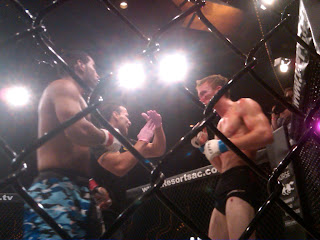 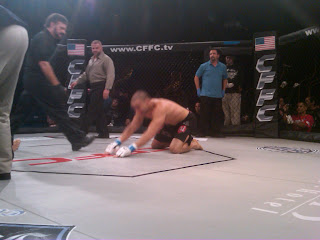 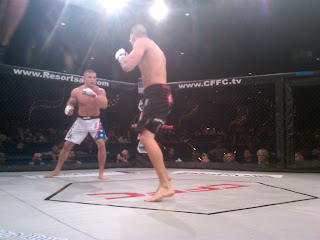 Postscript: Locked in the Cage

MMA Journalist trekked on down to Philly last night for Locked in the Cage, which was my first exposure to the promotion (and only my second visit to the City of Brotherly Love; my first was for a Bellator show). The event - guided by the expert hands of Fran Evans, Paul Miles and company - was smooth, and adding to the local show-feel (which I love) was the venue, a storied spot called the Asylum Arena where ECW used to do their pro wrestling shows. It was cool as fuck. Some thoughts on the card, which featured four amateur and four pro bouts:

-Nick Cottone, who's been scrapping in the cage since way before there was ever an Ultimate Fighter, looked to be his usual sharp self, mixing quick wrestling with, well, quick wrestling. But Billy Vaughan had his number, and after stunning him with an uppercut while Cottone shot in, he jumped into a mounted guillotine and that was all she wrote. Vaughan is now the bantamweight champ.

-Matt Nice just straight-up dominated Nicholas Bleser, and it was his ace jiu-jitsu and complete positional control that did it. Bleser was totally demoralized by the time Round 2 came around, and Nice just got on top and blasted away.

-Lamont Lister has had a long and fruitful career, but the strength of his chin has not kept up with the willingness of his heart. For about a minute and a half he fought to get and keep Brandon Saling down, but when Saling got up, BAM! He tagged Lister in the grill and put him to sleep.

-Harry Dickey had an impressive pro debut against Eddie Weiser, manhandling Weiser throughout the first, then damn near ripping off his arm in the second. Weiser left cage with his arm in a sling courtesy of Dickey's kimura. Yikes.

-In amateur action, Fight Factory's Matt Ibbotson had a nice, close back-and-forth with TSMMA's Nolan Wisser, and he came away with the tight split decision; Matt Rizzo out-wrestled a very dangerous John Michael Holland for the unanimous decision; Ken Richmond blended hard strikes with concise wrestling to decision Brandon Cromartie; and Javier Guzman put away a timid Michael Kropp.
Sent from my BlackBerry® smartphone with SprintSpeed