UFC 205, And The Evidence of Things Unseen 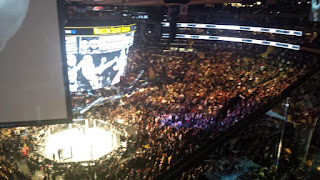 On November 2, 2013, Dagestani boxer Magomed Abdulsalamov fought before a cheering crowd at Madison Square Garden. He fought his heart out, fought to the final bell, fought until his brain was bleeding. But the New York State Athletic Commission – tasked to protect him and every other professional pugilist who laces up the gloves in the state – ignored his plight. Then came the coma and the stroke, the $100 million lawsuit and the investigation by the Inspector General. Ask my eight-year-old daughter about the “Butterfly Effect” and she’ll spin a yarn about time travel, and how one event can send out ripples that irrevocably change the future. On Saturday, November 12, 2016, the UFC came to Madison Square Garden for the first time, came to New York for the first time since the 1997 ban on pro mixed martial arts. They had to pay over $40,000 to insure the fighters, an amount heretofore unheard of in combat sports, and they had to work with an athletic commission that had never before sanctioned fights in an octagon-shaped cage.

Abdulsalamov never saw that butterfly land on him on that night three years ago. But it did. And New York would never be the same.