It was a bad night to be a foreigner, but it was a good night if you were a fan of fighting. On February 3rd, 2007, at Boardwalk Hall in Atlantic City, a one-shot promotion called World's Best Fighter assembled together a roster of fledgling Asian mixed martial artists and solid American up-and-comers and pitted them against each other in a "Team USA vs. Team Asia" contest. Team Asia got its ass kicked. Future UFC fighter Mike Massenzio played his usual ground-and-pound game against his Japanese foe, grinding out a unanimous decision, while local stud Greg Soto won via armbar and heavyweight everyman Justin Eilers won with a tsunami of knees and punches. The only real competitive bout of the event was Kevin Roddy versus Jong Man Kim - a Korean Top Team rep and the best grappler of the bunch - but "K-Rod" won via armbar with just three seconds left in the first round (the result was later changed to a "no contest" because, well, K-Rod is K-Rod you know). Aside from a few kickboxing match-ups and John Doyle and Brendan Barrett falling out of the ring (their bout was declared a "no contest"), the undercard also featured Team Tiger Schulmann rising star Lyman Good against Renzo black belt Julio Cruz, with Good's superior striking earning him the win via TKO. 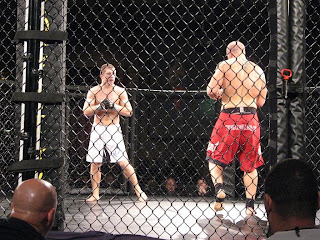