Yes, it's that magical time once again, folks, that rare and appreciated occurrence known as a new season of "The Ultimate Fighter" - a reality show that has managed to retain its youth and vitality with a never-ending parade of fresh ideas and concepts. In this installment - dubbed "Season 11 - No Kimbo" - we're treated to a rivalry so true and so hot, the very doors of the TUF Training Center have petitioned for restraining orders (to no avail, of course! They're just freakin' doors!). That's right, the punch drunk and incoherent Chuck Liddell and his arch-nemesis, Tito "Barely Relevant" Ortiz, are coaching the opposing teams. That, plus a revamped Training Center complete with ShowerCams (tm), a weird selection system where everyone must fight and win to get into the house but the remaining losers are availed a second chance if they clean Dana White's garage or something, and profanity-laced tirade after profanity-laced tirade, make for one hell of a promising season!

Heh, funny thing about those profanity-laced tirades. You see, Dana's actually contractually obligated to do them at least twice a season, and he wastes no time getting the first one out of the way, assaulting the ears and sensibilities of the new crop of middleweight prospects. It's hard to tell just what this rant is about - it could be about the stock market, Marxism, or the correct method of growing a petunia garden - but it's there, an ugly reminder that Dana did spend a few years in the Merchant Marines after high school.

And then it's fight time!

First up: the lead singer from Cypress Hill, with his big electric afro, against an orthodox Jew nicknamed the "Hebrew Hammer". "I want to show the world that Jews can fight," says the Hebrew Hammer, or something like that, and Cypress Hill promptly smokes him like a blunt in a fight so one-sided the Hebrew Hammer has flashbacks to his bris.

"I like to get into fights," says Hawaii Five-O, and get into a fight he does, wrecking some unassuming white kid.

"Hulk smash!" says Ronnie Kray (yes, the famous British gangster), and he wastes no time tossing his opponent to the canvas and jacking the poor guy's shoulder.

"Everyone thinks ze French are not tough," says Frenchie Frenchman. "But we are, and I will prove that." And then he goes out and takes a beating and surrenders. In Frenchie Frenchman's corner is John Hackleberry Finn (Liddell's own coach), and he doesn't like that Frenchie Frenchman is giving up. But just like you can't turn a glass chin back into the iron it once was, you can't change someone's heart, and the surrender is complete when Frenchie Frenchman begins waving a white flag and retreats to the locker room.

"There's no quitting in MMA!" yells Tito in typical Tito fashion. Uh, yes there is. It's called "tapping out".

We're then given highlights: some effeminate dude wins, some dude wins who speaks English but gets subtitles when he talks (why? I can understand him. Am I going crazy or something?), someone named Bobby McGee wins, and then time is slowed back down for Victor O'Donnell and Chevy Camaro, who plaster each other repeatedly until Victor O'Donnell is wheeled out on a stretcher with a busted orbital bone, Chevy Camaro still punching him and Victor O'Donnell lobbing bombs right back.

Sporting a record of 233 wins and 586 losses, RC Cola takes to the cage to take on some scrub and needs about 30 seconds to knock him out.

Then the producers hit the "fast-forward button" again, and we see clips of Costa Philippou lay down a beating on Leonidas and get armbarred, Rich Atonofneato (pronounced "a ton of neat-o") win via wrestling, another wrestler win, Chuck and Tito exchange glares, Dana declare that the hate between the two is so volcanic he fears losing his hair (um?), some other dudes win and some other dudes lose.

"Okay, you guys don't completing %$*#& suck," says Dana to the assembled winners. Then he turns to a producer off-camera and says, "Does that count as my second tirade?"

"No," answers the producer. "You need more F-bombs." 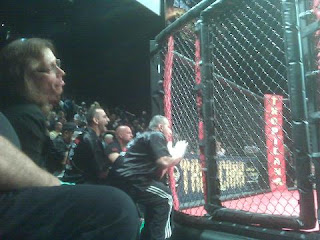