Ah, the backstage food spread... the yardstick by which a promotion's success or failure can be measured. A press credential usually gives you access to wherever you want to go, and through the years where MMA Journalist has wanted to go is where the free grub is at, where one rule has emerged immutable: the more extravagant the selection, the more doomed the organization. (Something about spending money on unimportant things, like feeding the press, being directly proportionate to loose finances. Or something. Who cares?) MMA Journalist regrets never having partaken in Pride's alleged epic epicurean ensemble, but there have been quite a few winners Stateside, so here are the top five. 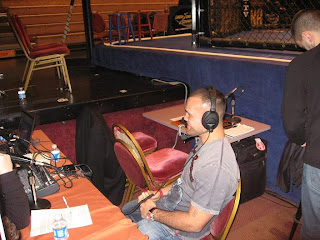 Mixed martial arts is now legal in the Commonwealth of Pennsylvania. According to a press release from the Pennsylvania Department of State issued yesterday, the Keystone State - following regulations drawn up by the State Athletic Commission - will sanction mixed martial arts events, a move that brings the land of cheese steaks and the Liberty Bell up to speed with the likes of New Jersey, Nevada and California in terms of embracing the sport. The first scheduled MMA show will be the Amish Fighting Championship in April, which will feature local competitors squaring off in the "Barn of Doom".
Posted by Jim Genia at 12:55 PM No comments: