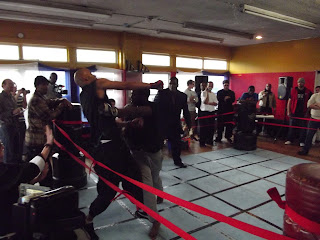 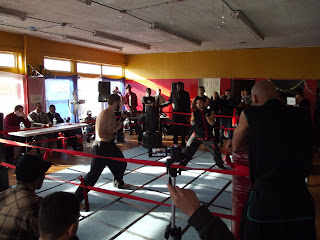 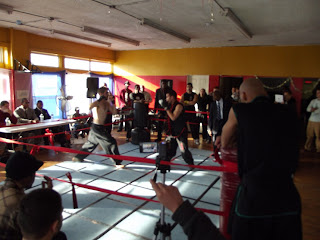 As unsanctioned, underground and illicit full-contact multi-style kung fu events go, yesterday's Manup Standup was pretty balls (old person translation: cool). I tend to lose interest when competitors don headgear for their fights, but thankfully most of the bouts were sans headgear and provided plenty of action. Some thoughts:

-I dig what I'm seeing out of San Bao practitioner Willy Cavali, although thus far I've only seen him twice, and both times he was smashing Hun Gar dude Jesse Upton.

-It's amusing that MMA keeps coming up whenever you talk to these guys about their fighting. Some of them ardently believe that the key to defeating an MMA fighter lies deep within their particular kung fu style, and that it's just going to take a pure practitioner to bring that prowess out.

-What the heck are the rules? They make a show of counting to ten whenever the fighters clinch and go to the ground, but how was all the rolling around down there scored? And why was the lightweight champ warned for hitting with "malice"? And there were a lot of decision, so what was the judging criteria? Maybe that's just the "sanctioned-show reporter" in me talking, but I was at least curious.

-It was a good event, and just like attending a UCL is a one-time must for any fight fan, so too is checking out one of these MUSUs. I loves me some underground fighting, and this was that with extra duck sauce and soy sauce.
Posted by Jim Genia at 7:35 PM No comments: