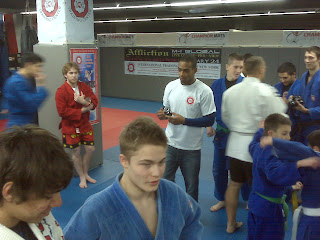 Can gangsters fight?  From such classics as "The Godfather", "Goodfellas", "Casino" and "Finding Nemo", we know that they can intimidate and assassinate pretty well, but we've never known much about their actual ability when it's time for a bit of the old one-on-one ultra-violence.  Well, thanks to British organized crime figure Ronnie Kray, who ruled 1960s London with an iron fist and who's struggling to make a name for himself in the world of homoerotic MMA reality shows, we now have an answer.  But first…

The wildcard fight!  Let's all talk about it!  Gather around, kids, and listen to a tale of two fighters, a duo comprised of "loss" and "fail" who got their asses kicked en route to the TUF finale but were given a second chance because… because… because why?  Is it that the TUF formula has gotten so stale that these little twists are thrown in to spice up what would otherwise be a soup made up of nothing but water from the garden hose?  Is it that TUF's advertisers are wavering, not quite sure that those 30-second commercial blocks may be worth it because really, how many viewers are going to tune in when Kimbo's not on the show?  Is it that releasing a dozen rabid weasels into the house while the contestants are sleeping is simply an idea the production's insurance company just cannot get behind?  Whatever the reason, two fighters who lost in the quarterfinals will get a second chance.  Will it be Dumb as a Bag of Hammers, who lost to Hawaii Five-O in the trivia round?  Will it be RC Cola, who's had 100 fights in his career and lost 70 of them?  Well, it sure ain't going to be Rich Atonofneato, who broke his prosciutto when he fought, and it damn sure ain't going to be Fruit Striped Gum.  Speaking of which…

Fade in to a fighter lying in bed.  Moaning.  Bandaged.  Clearly messed up.  With his shock of green hair, we realize it's Fruit Striped Gum.  "I went to the doctor yesterday and he operated on me for three hours," and with his arm in a sling, a bandage on his shoulder, and a patchwork of stitching all over his body, we believe him.  Apparently he really was injured in his fight, as the doctor removed his spleen and gall bladder, performed a vasectomy, reattached his right shoulder and sewed a cantankerous old man's head onto his left shoulder.  "You son of bitch," utters the cantankerous old man head.

It's time to choose the next fight, and with Cypress Hill's TKO win over some anonymous someone, coach Tito Ortiz has the ball.  The Giant-Headed One picks Brit gangster Ronnie Kray to face an unassuming kid named Josh.  How unassuming is Josh?  Says coach Chuck Liddell, "Wait, that kid was on my team?  I thought he was a janitor?"  Adds trainer John Hackleberry Finn, "I agree with whatever Chuck says.  Even if it's gibberish."

Training montage, and Ortiz is making his wards work hard with push-ups while on fire and sit-ups while trapped under a bus.  "I don't know if all this intense training is the smartest thing when someone has a fight coming up," says RC Cola, who's fought about 100 times and lost 70 of them.  Uh, dude, if you're saying that, then it must be a brilliant idea.

Also around this time, Ortiz makes a point of apologizing to Fruit Striped Gum.  "I gave you crap because I thought you were faking your injuries, but I can see now that I was wrong, so I'm sorry," says Ortiz.

And then it's fight time, and in typical Liddell fashion, Mr. I Can't Dance Better Than Donnie Osmond has taken a flight to Japan in the mistaken belief that Ronnie Kray's TUF quarterfinal bout was happening there.  Consequently, he misses the bout.

Also missing: Ronnie Kray's cardio.  Round 1 goes well for him and poorly for Josh, with the Brit gangster muscling his opponent all over the cage and shaking him down like he's an East End shopkeeper.  But the wheels come off the double-decker bus in Round 2, and in Round 3 it's all about the one kid that no one noticed picking apart a life-long criminal both on the feet and on the ground.  Josh takes the decision, and we have our answer: no, gangsters can't fight.

"You son of bitch," cries the cantankerous old man head.

According to MMAPayout, there's still a chance folks in the Empire State could somehow see some mixed martial arts before the year is out - a declaration that overlooks the fact that there have been over 60 unsanctioned but well-recognized MMA events in the state within the last ten years alone.  In the article "MMA in New York Still Possible for 2010" (http://mmapayout.com/2010/04/mma-in-new-york-still-possible-for-2010/), much is made of a recent Wall Street Journal article that examines the status of Governor David Paterson's budget proposal, a proposal that includes a provision that would allow the state to sanction professional  mixed martial arts.  However, what both the Wall Street Journal article and MMAPayout seem to forget is the 20 Underground Combat Leagues shows (where UFC champ Frankie Edgar got his start), the 14 Vengeance at the Vanderbilts (of which Matt Serra, Pete Sell and Phil Baroni are veterans), the five Empire State Warriors Challenges, the five Clash in the Cages, the three International Fight Nights, the four Martial Arts Madness's, the one Battle on Broadway and Aggressive Shoot Championship, and the eight or so events that have taken place on Indian Reservations in Upstate New York.  Have any of these shows been grand affairs to rival what the UFC/WEC/Strikeforce may bring to Madison Square Garden?  No, but they sure as hell count as MMA events.  (For a trip down memory lane, go here: http://mmajournalist.blogspot.com/2009/07/brief-history-of-underground-shows-in.html).