MMA Journalist will be cageside for the Asylum Fight League amateur MMA show tomorrow night at the Raritan Center in Edison, New Jersey, and provided my Blackberry has a signal, I will liveblog the event. There should be two title fights and a card of 12-15 bouts. Woot-woot.
Posted by Jim Genia at 11:21 PM 1 comment: 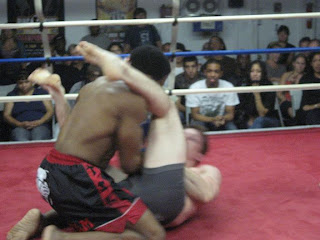 TUF 8 finalists Phillipe Nover and Efrain Escudero will duke it out tomorrow night at the TUF finale on SpikeTV, which will determine who is this season's Ultimate Fighter and who will be relegated to mowing Dana White's lawn on the weekends for extra cash. In light of White and coach Nogueira's high praise, which was lavished on the Brooklyn native once he started clobbering foes in the Octagon like the Fantastic Four's "Thing" clobbers run-of-the-mill bank robbers, does the undefeated Brazilian Jiu-Jitsu black belt Escudero stand a chance? Um, unless Nover slips on a banana peel on his way to the cage, the answer is "no". Here are five reason why Nover will win: 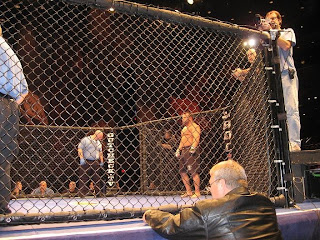 New Jersey killers Kevin Roddy and Steve DeAngelis will be in upstate New York on Saturday night, spilling blood at the "There Will Be Blood" MMA show at the Gil Lay Arena on the Seneca Nation Indian reservation (outside of Buffalo). The event features an undercard of amateur bouts and a trio of pro bouts, with Roddy (recently promoted to brown belt by trainer Kurt Pellegrino) and BCX featherweight champ DeAngelis taking on and likely murdering durable kickboxer Peter Kaljevic and striker Paul Compton. Said arena janitor Jerome Woods, "Roddy and DeAngelis? Ugh. I'm gonna go get my mop ready. There definitely will be blood."
Posted by Jim Genia at 9:52 AM No comments: