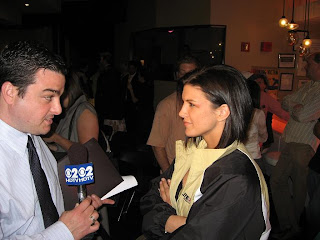 UFC To Stymie Strikeforce By Recycling All Their Own Discarded Trash

In the latest round of the imagined (or is it?) UFC/Strikeforce conflict, Dana White and company have decided to stymie Scott Coker's recruitment efforts by recycling all of their own old, discarded trash. First up on the recycle list are "New York Badass" Phil Baroni and Dennis Hallman - two fighters who, before Strikeforce signed Fedor and became a major player in the MMA promotion business, couldn't even get UFC matchmaker Joe Silva to take their phone calls. Now Baroni and Hallman are the recipients of a pair of juicy UFC contracts. Expect more Octagon detritus and debris to be scooped up by Zuffa in months to come.
Posted by Jim Genia at 2:10 PM No comments: 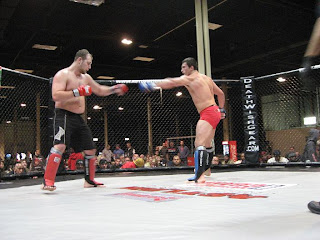 In honor of Saturday's highly-anticipated Gina Carano/Cris "Cyborg" Santos epic - the biggest fight in female MMA history - MMA Journalist has compiled this handy-dandy collection of the biggest moments in Northeast female MMA. Curiously, the Northeast has at times been a comparative hotbed for fighting femmes, with top talent like Amanda Buckner, Laura D'Auguste, Tara LaRosa and Roxanne Modaferri (before she moved to Japan) calling this part of the world home. Anyway, the list: 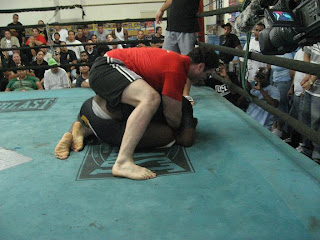 Predictions for Strikeforce: "Carano vs. Cyborg" 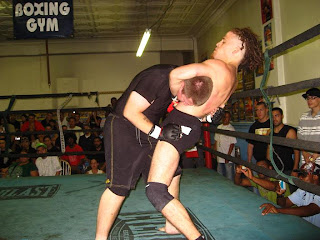 The UFC's anti-Strikeforce effort is in full-swing with the announcement that SpikeTV will air an alleged Brock Lesnar sex tape at the same time as Strikeforce's "Carano vs. Cyborg" event on Showtime on Saturday night. The Lesnar tape is rumored to include the UFC heavyweight champ's recent antics with a giant inflatable Coors Lite can, his molestation of the Minnesota Vikings' mascot "Viktor E. Viking", and clips of his bachelor party, where strippers reportedly frolicked in over 1,000 pounds of carp. "You want to take my Fedor from me?" crowed Chief UFC Cry Baby Dana White. "Scott Coker, I play for keeps!"
Posted by Jim Genia at 9:06 AM No comments: