MMA Journalist has just received a fax from an EliteXC insider regarding tonight's ShoXC event in Hammond, Indiana. The event, which will be broadcast live on Showtime, will feature Dave Herman taking on TUF veteran Kerry Schall, as well as bouts with TUF washout Jason Guida and rising stars Anthony Lapsley and Bubba McDaniel. The fax - deemed to be credible as this source (which will remained unnamed) is a reliable one - seems to list the "under the table" bribes the competitors are receiving to ensure a specific performance. The list is as follows: 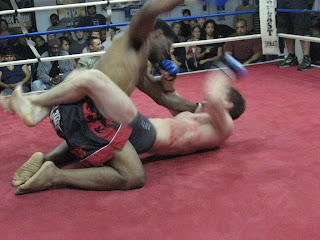 If you saw Fox 5 News' story on "Illegal Fight Clubs" a few weeks back, then you saw 169-pound MTA employee Chaz Dimitropoulos throwing down and throwing down hard at a July Underground Combat League event. Sporting a 2-1 record, a background in traditional Japanese Jujitsu and a lot of heart, Dimitropoulos won fans over with a gutsy performance over John Padron - a performance that saw Padron blast him in the face with a punch that swelled shut his eye in Round One and Dimitropoulos come back to snag an armbar in Round Two. "Who really wants to travel all the way out to New Jersey to do mixed martial arts?" says the up-and-coming fighter. "I don't think it's fair that we have to. If you're from New York, you should be able to fight in New York." What does the future hold for the part-time athlete? "I would definitely like to get a lot more fights under my belt," he says. "I would like to be comfortable in the ring. I don't want to be nervous at all - I want it to feel like I'm just in a training session." 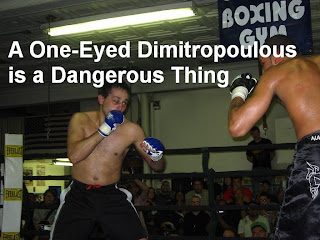 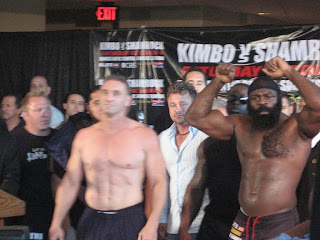 Zach Arnold of FightOpinion.com has been around as long as I have, and in that time he's established himself as a journalist full of honesty and integrity. And in light of the recent EliteXC/Kimbo Slice stand-up bonus allegations, Zach really, really thinks EliteXC must die. Or at the very least, EliteXC honcho Jeremy Lappen and the Shaw father/son conglomerate need to be crucified, burned at the stake, dismembered and burned again. I admire Zach's fervor. Every sport needs a watchdog willing to decry every bad move and instance of possible unethical behavior. But one thing I learned in law school (yes, I went to law school), and especially in the New York City Police Academy (yes, I went there too), was that there's a difference between when something is wrong and when something is illegal. And in this instance, the Florida State Boxing Commission itself has already guffawed at the idea that EliteXC broke the law. Did EliteXC throw a stack of cash at Seth Petruzelli to encourage him not to go for a takedown against Kimbo Slice? Is the UFC guilty of the same thing when they show up in Phil Baroni's and Matt Lindland's locker rooms before their UFC 34 bout, promising them that they're gone from the promotion if they don't make their fight exciting? You know, it doesn't really matter. Because what happens in the cage is never what anyone plans. Not the promoters, not the fighters, not the fans. And that's what makes this sport so great.
Posted by Jim Genia at 9:47 AM No comments: