The Return of Hazem Ibrahim

This Friday will see another installment of Ring of Combat in Atlantic City, a notable event because it features heavyweight star-on-the-rise Gian Villante, bantamweight killer Nick Pace and green-haired flyweight demon Louis Gaudinot, but also because it promises to see the return of Hazem Ibrahim.  Who?  Set your time machine to 2003, to Reality Fighting 3 at Marist High School in Bayonne.  That guy trampling his opponent like a renegade bull?  That’s Ibrahim, and he’ll go on to become a Ricardo Almeida-trained jiu-jitsu brown belt and one of the Garden State’s toughest light-heavyweights.  And though his last two ventures into the ring may have ended in defeat – a pair of losses to future UFC competitor Tim Boetsch back in 2006 and 2007 – you can’t say the man hasn’t been sharpening his skills.  Since then, he’s snagged a no-gi championship and taken third at the jiu-jitsu Pan-Ams, and now runs his own school in East Brunswick.  Check out ROC for knockout specialists Villiante, Pace and Gaudinot, but don’t overlook the returning Egyptian warrior.  Ibrahim can scrap.

Confirmed: UFC a Tangled Web of Lies and Deceit

This just in: Despite assurances from UFC Chief Carnival Barker Dana White that the proposed Tito Ortiz/Chuck Liddell match-up was still on, Liddell will instead be facing Rich Franklin at UFC 115 – a development no doubt related to Ortiz’s coaching stint on TUF 11 and the former light-heavyweight champ’s mysterious tweets during filming that hinted at an injury.  Of course, the underlying issue here isn’t that Ortiz may be hurt or that Ortiz vs. Liddell III is off, but that White outright lied to reporters when confronted with the question of whether the fight was a "go".  Sadly, this only reaffirms the notion that the UFC is a tangled web of lies and deceit.  For your edification, MMA Journalist has compiled a list of White’s other more-notable fibs and untruths below. 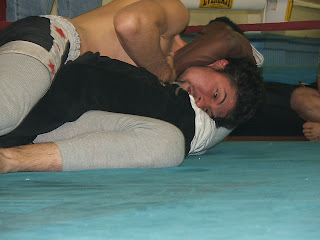