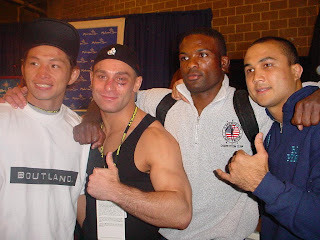 Posted by Jim Genia at 12:57 PM No comments: Links to this post

Team Rashad is training and everyone is all smiles and love and tender affection while they jog around the training center, occasionally dropping to do a forward roll or pausing for an awkward cartwheel. But beneath that veneer of idyllic happiness lurks something dark. Something unsettling. Yes, Matt Minestrone's shoulder wants to make its presence known, and it does it in the form of complaints ("Ouch, that push-up is going to hurt. Maybe you should give me some ice? Ouch, hitting that heavybag is going to hurt. Can I get a shot of heroin?"). Matt Minestrone brings his shoulder over to coach Rashad Evans and Evans listens to the shoulder drone on.

"Heroin? Really? Man, that's a short-term fix for what could be a long-term problem," says Evans, trying to reason with the shoulder. "Why not just tweak your nipples?"

But Matt Minestrone's shoulder will have none if it, and it points out the fact that it's just a shoulder and it doesn't possess nipples.

Over at Team Rampage, things aren't going too rosy for Zak Jensen in practice. Apparently he sucks, and everyone takes a moment to describe in colorful terms his suckiness. "There's suck, and there's suck," says Scott Garbage. "Zak is SUCK."

At that point incomprehensible Brit James McSweeney says something into the camera, but outside of those intoxicated and watching in pubs, no one understands him.

Later on in the training center, Matt Minestrone walks up to coach Evans. "I don't think I can punch today. My shoulder needs ice."

Some quick backstory on Sims and Justin Wren: Sims is tall and goofy, trains with the Hammer House but cannot wrestle, fought Frank Mir in the UFC twice, and was homeless prior to getting into the TUF house. Justin Wren is both Greek and Roman and he wrestles.

Close up of Kimbo sitting on a couch. "I just want to fight again," he says. Yes, Kimbo. And every employee of SpikeTV from the executives on down to the night cleaning lady wants you to fight again, too.

Sims lets everyone know that he wants to make an impression by winning big or losing big, and though he'd prefer to win, he's not afraid to make a statement by losing. As an exclamation point, he stands up and flexes like a pro wrestler.

And then it's fight time, and after the two engage along the cage and Justin Wren gets the takedown, Sims gets his wish re: making an impression. Thanks to an arm-triangle choke, the tall and goofy UFC vet is left unconscious on the canvas. It takes paramedics 20 minutes to revive him.

Just like in the last episode, coach Jackson refuses to come to the aid of his fallen fighter, and afterwards Evans confronts him in the hallway. "That's some crappy coaching-style you got there," he says.

The end.
Posted by Jim Genia at 10:28 AM No comments: Links to this post