At what point does a douchebag become a douchebag? Is it ever cool to be a douchbag? How far can a douchebag go in being a douchebag and still succeed? If a douchebag falls over in the woods and no TUF cameramen are around to film it, did it actually fall? All these questions and more are addressed on this week's episode of VH1: Behind the Music's "Ultimate Douchebag - The Early Years". But first...

Still in full-on Red Bull-induced hysteria mode, Quinton Jackson engages in a verbal sparring match with Rashad Evans, the former imitating the latter's knocked out form after he fought Lyoto Machida, the latter pointing out that the former ain't no coach. That's right, Evans has said it: Jackson ain't no coach. The words hang there in the air, rendering the atmosphere in the TUF training center thick and gloomy and unpalatable to those stuck within the confines of this godforsaken competition. Jackson's team has lost every match-up thus far and the Pride veteran doesn't give a crap anymore, doesn't even want to show up for his fighters' bouts or comfort them in the cage after they've inevitably lost. Jackson has checked out, has moved on to his next role (as Othello in Martin Scorcese's "Othello the Moor", check your local listings), and this stint on TUF 10 is just something to pass the time.

And at that Jackson crumbles, a whimpering, cringing wreck, reflexively lying face-down on the floor while muttering, "Don't tase me, bro. Don't tase me."

Now it's time for the fight selection, and as Team Rampage has lost everything even remotely resembling a competitive combative sport contest, Evans still gets to choose. He selects Scott Garbage and Matt Minestrone. Our journey of douchebaggery begins!

Back at the TUF house Matt Minestrone hands Scott Garbage a note. "Dear Scott: I love you," it reads, and the other members of the house are scandalized.

"What a scumbag!" declares Mike Wessel. "It's 'douchebag'," a producer whispers off-camera. "What a douchebag!" says Mike Wessel, correcting himself.

At the TUF training center Team Rashad informs Evans of the note. Evans calls Matt Minestrone into his office and chastises him. "Look, you can love anyone you want, but you need to fight first."

"I know what I'm doing in my own head," replies Matt Minestrone. "I hear voices, but fighting silences them. Also, I can make phone calls telepathically."

Evans stares at him like he's a giant pigeon that just took a dump on his car. "You are both wierd and a douchebag."

The TUF house, and now Matt Minestrone is drinking orange juice. Apparently it's not his, apparently John Madsen went out and bought it himself with his own damn money and the juice was not provided by the show's staff, because John Madsen gets all bent out of shape. "You're a douchebag. I should slap your pretty face," he says. Matt Minestrone doesn't like that, so when they're back at the training center and the two suit up for sparring, Matt Minestrone actually spars.

"Wah! You're being a douchebag!" says John Madsen, and Matt Minestrone storms off to the office. Again, Evans confronts him.

"What the hell is wrong with you? You haven't even fought yet and you're creeping people out with your douchebagness. Save it for your opponent!"

"What a dirtbag!" declares Mike Wessel. "It's 'douchebag'," a producer whispers off-camera. "What a douchebag!" says Mike Wessel, correcting himself.

Once more we're back at the house, this time by the pool, where an audience of castmates have gathered to watch Matt Minestrone shoot some hoops on the basketball court. Oh, and also, Wes Sims is apparently a ninja, and in his ninja garb he stealthily stalks the oblivious Matt Minestrone... to hug him. That's it. All he does is sneak up on Matt Minestrone and hug him.

"You're doing it wrong!" screams mulleted ex-ninja Scott Morris from his trailer in Des Moines, and he emphasizes his disapproval by tossing a half-empty can of Schlitz at his television.

"Duh, I am going to punch him in the face," says Scott Garbage, but real slow, like he's developmentally disabled or something.

Fight time! But prior to everyone wrapping their hands and warming up, Matt Minestrone informs coach Evans that he's telepathically called his wife.

Referee Josh RosencrantzandGuildenstern starts the action, "action" the operative word here, and Scott Garbage and Matt Minestrone engage in the sloppiest, ugliest, most cardio-lacking, technique-lacking brawl to ever grace the Octagon. In between rounds Dana White exclaims it's the best fight ever - a sure sign of its suckage - and when the fight resumes it only gets sloppier and uglier. Matt Minestrone wins the decision, "win" the operative word here.

And Jackson wrecks a door. 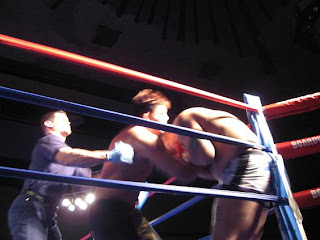