It's main event time. Alexis Davis is about to take a crack at top dog Tara LaRosa, and the Garv is quoting MMA.tv with a "How can she slap?" reference. Oh the humanity. Anyway, LaRosa gets a warm reception from the crowd, and she drops Davis with a left in the first round and works some ground and pound. Round 2 sees Davis sink a tight triangle that LaRosa guts her way out of, while the third and final round has LaRosa battering the hell out of her and cutting Davis above the eye. The doctors stop it when Davis is too much of a bloody mess. And I'm spent.
Posted by Jim Genia at 11:32 PM No comments:

Kamal Shalorus is squaring off against Jonathan Evans now. Evans hails from the Rhino Fight Team and is a UCL vet, but Evans' gritty street style is no match for Shalorus' British ways. He falls to Shalorus' poor dental hygiene in 35 seconds. Next is Edward O'Daniel against Charlie Brenneman. Expect a takedown at some point in this one. Yes! I totally called it. Brenneman has O'Daniel on his back in no time, and is giving him the "pedophile in prison" treatment. (What did you say? Brenneman always takes his opponents down? Quiet you!) Brenneman gets the TKO in Round 2 after he puts O'Daniel in a crucifix and rains down punches.
Posted by Jim Genia at 11:07 PM No comments:

Heavyweights Josh Barnes and Sherman Pendergarst step into the cage after a brief intermission. I'm hoping the Garv will ask them their thoughts on the Kawajiri fight. Alas, he does not. And Barnes needs only 32 seconds to tag Pendergarst with punches then fall back into a guillotine for the tap. Next up: Justin Robbins against Zach Makovsky. Robbins has Robbie Lawler in his corner. An interesting aside about Lawler is that he got his "Ruthless" nickname from the way he plays the boardgame Monopoly. Regardless, Makovsky's superior wrestling has him snagging the rear naked choke in Round 2.
Posted by Jim Genia at 10:42 PM No comments:

Honorio and Powell are really blasting each other on the feet in Round 1 and the crowd is loving it. They love it even more when Honorio finally finds a home for his high kick and puts Powell away. Best fight of the night thus far. There's some sort of intermission now as Eddie Alvarez's DREAM fight against Kawajiri is played on the big screen. I guess this is for those who don't have YouTube? I don't know. Excellent. The Garv is in the cage reading Sherdog's write-up on the Kawajiri fight. And now some soldiers in uniform are brought into the cage. What do they think of Alvarez's fight against Kawajiri? Please tell us!
Posted by Jim Genia at 10:04 PM No comments:

Dan Stittgen vs. Greg Killian is up now. Killian trains with Team Pellegrino, and some of you diehards out there might remember that he fought in Ring of Combat about 30 years ago. Anyway, this will be his second pro fight. I asked him before the show why he took such a long layoff, and he informed me that he entered a seminary and became a priest. Okay, not really. But the crowd loves him. They do not, however, love Stittgen, and when Stittgen wins by rear naked choke and then proceeds to jump atop the cage and scream, "Fuck you, I'm the man!" they love him even less. Sidemar Honorio and Mike Powell are now in the cage.
Posted by Jim Genia at 9:42 PM No comments:

There will be nine fights tonight, and first up are Jon Meyer and Craig Kaufman. This match-up is an interesting one, as Meyer is from Ohio and Kaufman is from Illinois and absolutely no one on the East Coast gives a crap about either fighter. In fact, despite the decent back-and-forth grappling battle going down within the cage, from my seat I can see one audience member filing her nails and another audience member doing his taxes. Meyer gets the tap out via heelhook in the third round. Also, I think that audience member doing his taxes is getting a sizeable return. Next up is Nat McIntyre from Minnesota vs. Tuan Pham from somewhere close enough for people to care about him. Of course, it helps that Pham wrecks McIntyre in 40 seconds.
Posted by Jim Genia at 9:12 PM No comments:

Monte Cox truly is the Godfather of MMA. He's holding court in a dressing room, sitting in a big chair while people come in, kneel, kiss his ring and beg for favors. I think I overheard the Garv asking Monte to have someone killed. Ugly, ugly business that.
Posted by Jim Genia at 8:52 PM No comments:

MMA Journalist is here at cageside for the Extreme Challenge "War at the Shore" event in Atlantic City. The event was originally supposed to be headlined by Philly superstar Eddie Alvarez, but a freak ice skating accident put him on the sidelines. The main event mantle then shifted to EliteXC champ Wilson Reis, but he tested positive for lycanthrope in his prefight medical screening, so now Tara LaRosa is at the top of the card. In attendence are Alvarez, Monte Cox, Robbie Lawler, Kurt Pellegrino, a bunch of ring card girls wearing sequined eveningwear, and the usual New Jersey MMA crowd. The cafeteria features breaded chicken cutlets, salmon, boiled potatoes and something resembling vomit. I don't know, maybe it is vomit.
Posted by Jim Genia at 8:36 PM No comments:

MMA Journalist is cageside for Ring of Combat 27 in Atlantic City, promoter Lou Neglia's long-running pro show and the home of nearly every Northeast badass around. There are 13 bouts on the card, with a ton of well-known local veterans mixed in with new blood, and first up is a preliminary bout between Julio Rosario of Semper Fi MMA and Ryan Vacarro of BJJ Shore Academy. Round 1 sees Vaccaro manage a takedown and try to work his ground and pound, but Round 2 is all about Vaccaro hugging Rosario to death against the cage and Rosario pounding the ever-loving crap out of Vaccaro while trying to stay on his feet. Unfortunately for the Semper Fi MMA rep, he's docked a point for grabbing the fence - which turns what would normally be a draw into a decision win for Vaccaro.
Posted by Jim Genia at 5:39 PM No comments: 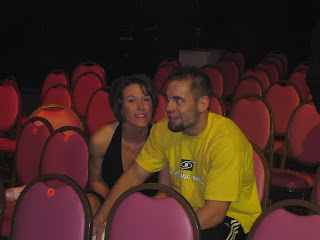 Predictions for Affliction: "Day of Reckoning"

Wow. Affliction is actually having their second show. Who'd have thought? Well, here's some predictions: