-Travis Wynn kicked ass in his debut, but the scorecards on that unanimous decision don't accurately reflect how good Marcus Daniels is. Daniels has rock-solid jiu-jitsu, and a ton of composure when it matters. Wynn was just a superior wrestler and was able to dictate how the fight went.

-In my CFFC preview, I posed the question "Is Brad Desir the real deal?" The answer: Oh fuck yeah. Luciano Cristovam was every bit the jiu-jitsu stud you'd expect from a Renzo Gracie black belt, and he absolutely dominated Desir in the first round. Like, completely dominated, a 10-8 round for sure. But Desir didn't falter, and came out in the second winging bolos, and when they started connecting Cristovam was doomed. Desir has got a bright future ahead of him the cage. Very bright indeed. (As an aside, why the hell did Cristovam's people agree to that fight with Desir? It was his MMA debut, and he was taking on someone with eight fights - both amateur and pro - under their belt? That's nuts. Just like when Igor and Gregor Gracie took on Tom Gallicchio and Doug Gordon, Cristovam got creamed.)

-Man, Jackson Galka's Muay Thai is sharp as hell and fun to watch. If he got a chance to land those leg-kicks for another round, Terrell Hobbs' leg was going to fall off.

-We all knew going in that Claudio Ledesma is one of the best, but what we didn't know is that Pedro Gonzalez is actually pretty dangerous himself. I'd like to see Gonzalez again, against someone high-ranked as Ledesma.

-Anthony Morrison has still got it. Jay Haas was no slouch, and had some nice transitions to go with his functional strength, but Morrison put him on ice. I'd like to see Morrison make a run at the CFFC featherweight title sometime soon.

-Sean Santella ate a lot of punches, and things were looking really grim when Bryan Laschomb found his groove and started sprawling and brawling effectively. But then came the slick jiu-jitsu, and Santella had the kneebar. Nice. (Note: the athletic commission labeled the official result as a heelhook, but from my angle I could see it was a straight kneebar with Laschomb's foot tucked under Shorty Rock's armpit.)

-How ready is Joey Gambino ready for the UFC/Strikeforce/Bellator? Against his toughest opponent to date, Gambino kicked ass for most of his five-round bout against Kenny Foster, and even after a blocked kick in Round 4 saw Gambino likely break his arm, the CFFC featherweight champ kept going. That kind of mettle - plus his skill, strength, speed and technique - means it's just a matter of time before we're seeing the dude on TV. He's definitely ready.
Posted by Jim Genia at 7:10 PM 1 comment: 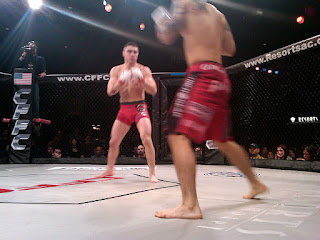 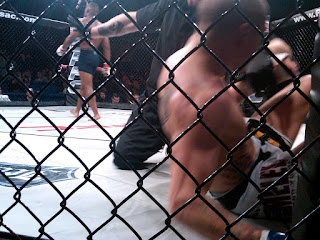 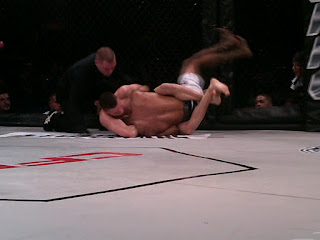 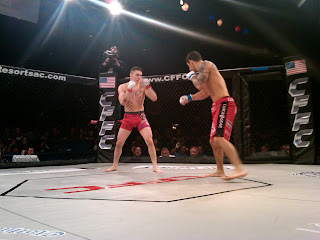 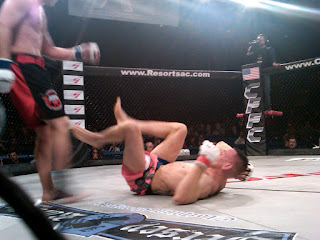 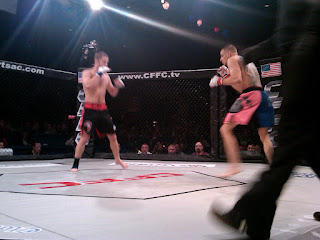