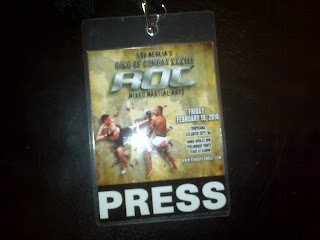 Sent from my BlackBerry® smartphone with SprintSpeed
Posted by Jim Genia at 9:48 PM No comments:

Reality Fighting 10 saw Nick Serra defeat Carlos Nieves before a screaming and rabid crowd packed into Boardwalk Hall in Atlantic City, and it saw future stars Dante Rivera, Mike Massenzio and Jim Miller each rack up wins as well.  But that night in November, 2005, also had Dan Miller popping his MMA cherry with a victory via submission, and it would mark the beginning of a hard-fought, three-year climb up the Northeast mountain that would eventually him into the Octagon.  What sort of fighter was Dan when he was coming up?  Like his younger brother Jim, he was gritty as hell - a trait that mixed well with his wrestling- and jiu-jitsu-heavy game.  And despite a close, split decision loss to Massenzio at Reality Fighting 12, Dan was either taking opponents down and making them tap or taking them down and making them his bitch until the final bell.  Notable wins included choking out Lance Everson, damn near ripping some cat's head off with a guillotine at an IFL, decisioning John Howard, and slapping a kneebar on Ryan McGivern to win the IFL's middleweight strap.  Dan could definitely do the dance.

On Saturday night Dan is one-half of UFC 114's co-main event, and though he may be coming off a pair of losses to top-ranked contenders Chael Sonnen and Demian Maia, and though some seriously weighty issues at home may be taking up quite a bit of his time, he's still every bit the promising badass he was back at Reality Fighting 10.  You can bet UFC 114 opponent Michael Bisping is taking him seriously.  You should, too.