The UFC's "Fight for the Troops" event, which aired on SpikeTV on Wednesday night and featured one of the most violent cards in mixed martial arts history, raised $4 million for the "Intrepid Fallen Heroes Fund". Unfortunately, thanks to injuries sustained by nearly every combatant on the card - Corey Hill's fractured leg, Yoshiyuki Yoshida's fractured skull, Jonathan Goulet's decapitated head and subsequent reattachment surgery - the price tag for the event exceeded the money raised by $1.2 million dollars, a tab that the Intrepid Fallen Heroes Fund had to pay. "Ain't that a kick in the pants," said spokesman retired Army Colonel Haverstrom "Machine Gun" Jessup. "I mean, it's a shame this Razak Al-Hassan kid needed a prosthetic arm and Brandon Wolff and Matt Wiman had to have face transplants, but really, we needed this money for the soldiers injured in Iraq and Afghanistan." Lamented Colonel Jessup, "We're worse off now than we were before."
Posted by Jim Genia at 5:09 PM No comments: 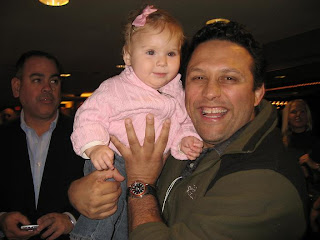 There's a preliminary ROC 23 card floating around, and though the February 20th event is a bit of a ways off, what I've seen thus far looks pretty good. Studs like Chris Liguori, Matt Makowski and Greg Soto are slated to compete, crowd-pleaser Chris Schlesinger is taking on an over-matched Ryan McCarthy (I believe this will be Schlesinger's first time at lightweight), and Jay Isip will return to square off against Team Serra/Longo fighter Nabih. However, the money shots are going to the heavyweight battle between BCX champ Joe Abouata and up-and-comer Bret Kohan and the striking cataclysm-waiting-to-happen between Aaron Meisner and Constantinos Phillippou. Meisner and Phillippou... wow. Both men are superior Muay Thai guys with ultra-dangerous clinches and an arsenal of weapons. A lot can happen between now and February 20th, but if just one match-up on the card stays together by the time ROC 23 rolls around, I pray it's that one. Meisner vs. Phillippou will be well worth the price of admission.
Posted by Jim Genia at 3:36 PM No comments: 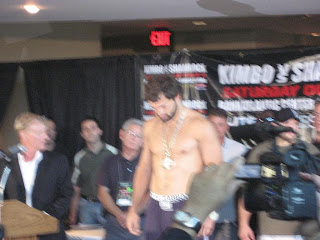 Who Should Phillipe Nover Fight Next?

Yeah, Brooklyn mauler and TUF 8 star Phillipe Nover lost at the finale and Efrain Escudero is "The Ultimate Fighter". Big whoop. But much-ballyhooed six-figure contract notwithstanding, Nover is a still a "name", and a tough and dangerous competitor that the UFC will put back into the Octagon as soon as possible. So who should the man dubbed the next Anderson Silva and GSP fight next? The easy answer is fellow TUF alum Junie Browning (to drag out whatever TUF 8 story lines they can). Yet if matchmaker Joe Silva stays true to form, which dictates that the traditional post-TUF opponent is someone who plays towards that TUFer's strengths, then Nover will get someone he can punch in the face. In this instance, that could be:

This list is by no means all there is to choose from, but these are all people under contract with the UFC, and I could see each and every one of them trying to throw a strike before realizing taking Nover down and laying on him is the way to go. Who will Joe Silva pick? Time will tell.