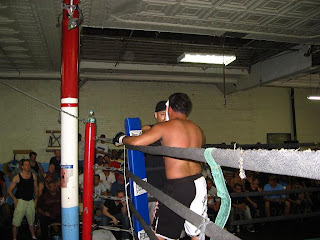 UFC 89 is nearly upon us, and the Birmingham, England event features a bevy of moderately-talented US and international fighters mixed with scrubs - plus the occasional future star. One such future star is lightweight Jim Miller, a jiu-jitsu bad boy who went from dominating the New Jersey circuit to kicking Bart Palaszewski's ass in the IFL. His opponent for UFC 89: David Baron, a Frenchman with a judo background and a recent win over a past-his-prime Hayato Sakurai. Expect Baron to choke on a baguette, complain about America, and retreat and surrender at the earliest opportunity. UFC 89 will air for free on SpikeTV on Saturday night (on a tape delay), and the main event pits UK "Great White Hope" Michael Bisping against the hard-headed Chris Leben in a bout that promises a lot of crazed looks and unintelligible post-fight speeches.
Posted by Jim Genia at 1:29 PM No comments: 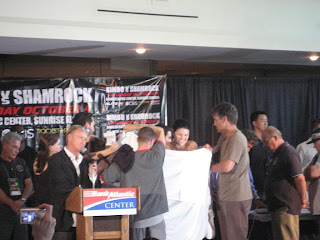 The fifth episode of TUF 8 saw a lot less alcohol consumption, a lot more of coach Nogueira speaking incoherently, and a quick fight between two light-heavyweights who belong in the minor leagues fighting for a cheap and tacky belt and bragging rights at the local Hooters.