And so it was that when Dana White declared Jason Pierce too sad to compete, and Pierce's cohorts on Team America: World Police weighted the non-fighter down with chains tied to cinderblocks and dropped him into the pool, that Pierce the Smurf the hates everything survived. To hate and hate again. And also, to betray mom and apple pie and the ol' red, white and blue by giving Team UK the lowdown on how the surviving members of Team America: World Police fight (because their abilities have heretofore been kept under wraps somehow. Or something. I don't know. It's still a betrayal - trust me on that.) Because, after all, they did try to kill Pierce, right? So Pierce just wants revenge, plus he hates everyone, so he plants sticks of dynamite under the bleachers and parks a car with a trunk packed with fertilizer and diesel fuel outside of Dana's house.

Last night's episode begins with Dana meeting with team coaches Michael Bisping and the Queen of England. It's time to discuss who is fighting who in the semifinals, and Dana usually likes to make it a formal affair with clipboards and interviews and everyone saying who they'd like to fight and who they have a crush on and will eventually marry when their state makes that sort of thing legal. Should they mix up the teams at this point and pit Team America: World Police fighter against Team America: World Police fighter and Team UK fighter against Team UK fighter? Bisping vehemently says no, that the teams should remain intact and let the chips fall where they may in regards to the live finale. The Queen of England opens her mouth to speak, but the words come out so slow that Dana calls in a paramedic to check to see if she's still alive. She is. She just operates in a plain of existence where they drive Molasses Cars and action films center around various brands of paint drying on a wall.

"Screw it," says Dana, and he adds a few more F-bombs for emphasis. Then he announces match-ups that would leave the teams intact, including tonight's scrap of the Marquis de Johnson and Nick Ostrich.

Back to Pierce, whose solemn vow of revenge and oath of hate includes threatening to poison Carrot Top's milkshake and revealing to the Brits the lyrics to "The Star Spangled Banner". Will he do it? Will he stab the Constitution in the back?

He does, and armed with the knowledge of how the Marquis de Johnson likes to read romance novels and eat praline cookies in bed, Nick Ostrich formulates a plan to win in the Octagon and cement his place in the finals.

Meanwhile, Pierce's reign of terror continues. Sneaking into the big vat of Xyience kept in the backroom of the TUF center, he dumps in a collection of old mismatched sneakers. Then he nefariously hides Cameron Dollar-Dollar-Bill-Y'All's tutu and feather boa. Oh the humanity!

The Marquis de Johnson squares off against Nick Ostrich. Does Ostrich truly have his opponent's number? Aside from a blazing low-kick that the Marquis has no answer for, and a flurry at the end of the Round 1 that has the Marquis rocked, no, Ostrich does not. They fight, they fight hard, and they're really wailing on each other when time runs out in the first frame, but Ostrich ultimately takes a beating on the ground. When the dust settles and the scorecards are read, the Marquis is declared the first semifinal winner. Elated, he jumps around the cage.

Yet at that moment, Pierce is in the parking lot with a can of spray paint, changing to official UFC Hummer to the official Affliction Hummer. 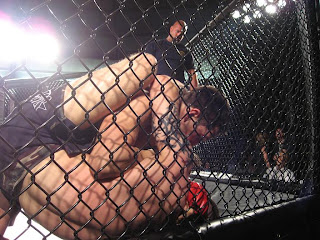 The East Coast ADCC North American Trials is coming to the Collins Arena at Brookdale Community College in Lincroft, New Jersey on June 13th and June 14th. If you think your backyard wrestling skills have prepared you well enough to compete with some of the best grapplers in the world, go on down and earn your spot in the prestigious ADCC finals. Wear a Speedo, make sure you speak with a fake Portuguese accent and tell them MMA Journalist sent you.
Posted by Jim Genia at 9:57 AM No comments: