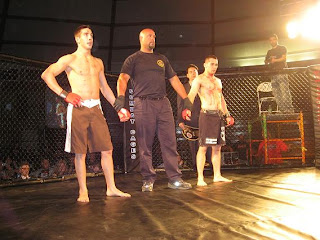 Like a Steven Soderbergh film, this episode is layered with scenes and montages of only tangential relevance to the TUF premise of aspiring fighters locked away in a house and competing for a UFC contract. In other words: WTF?

In the training center, the Brit team works out using various methods of "man holding man" machismo. Somewhere in Manhattan's Chelsea neighborhood, a gay bar's patrons hoot and holler as they watch on a big-screen TV. Then Michael Bisping introduces a giant tire and sledgehammer, and Team UK proceeds to smash the floor, themselves and their guitars and drums because that's what The Who did back in the day.

Cut to Team America: World Police, and a brooding Jason Pierce. He hates his teammates, he hates MMA, he hates living in the TUF house and he hates Smurfy.

Back to Team UK and David Faulkner, whom everyone loves and wishes he were their dad or something. Due to their accents I gather that Faulkner can wrestle well and has good stand-up, but one of the Brits either says Faulkner is a "pitbull" or a "pickle". God, who knows.

We then return to Team America: World Police and the ongoing saga of Pierce, now revealed to have an injured foot. "I hate feet," Pierce declares. "Just be positive," suggests the Queen of England (aka Dan). Big Tall French Guy chimes in with a "Oui" - which means "yes" in kickboxing. "I hate you all," says Pierce, and he hobbles away. "I don't know what's going on in Jason's head sometimes," says the Queen of England, and then he lies down in a corner of the gym and becomes very, very still. Eventually a cactus sprouts up and grows around him.

Cut to the next fight selection, where Carrot Top is paired up against Nottingham Forest's favorite son, Ross the Incoherent. Will Carrot Top's cooties clear up in time?

Then it's time for tennis! What a second, tennis? WTF? Anyway, Dana White gathers both teams at a tennis court, and after he and Bisping embrace - and stare long and hard into each other's eyes, their mouth's just inches apart and their lips quivering like a fat kid quivers when faced with a real-life version of Mayor McCheese - Dana announces that Bisping and the Queen of England will play tennis for money. Hilarity does not ensue. The Queen of England wins handily, but the real winners are the fans of tennis, who will never have to be subjected to watching this unless they somehow click on SpikeTV while changing channels on an afternoon they're not out horseback riding or playing polo.

Fast-forward to a birthday celebration at the TUF house. It's Carrot Top's birthday!

And then it's fight time. Ross the Incoherent keeps picking up Carrot Top and dumping him on the mat, and though he delivers an illegal knee to the grill while Carrot Top is on the ground, the point deduction means nothing; he eventually gets Carrot Top in position for a submission and snags an armbar. The end.
Posted by Jim Genia at 10:01 AM 1 comment: