Fox 5 News, a local New York City news affiliate, will air a segment on the Big Apple's Underground Combat League tonight. The segment, called "Secret Fight Club", was filmed at the last UCL event - an event that saw two decapitations as well as one fighter ripping out another's spine and yelling "Fatality!" Expect a fair and balanced report with absolutely zero sensationalism. 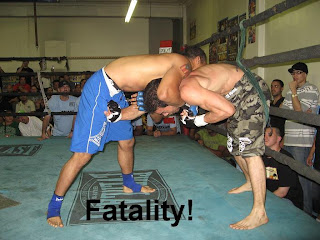 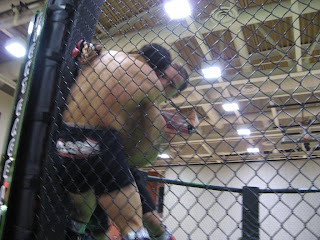 Taking a stand against what He describes as an "abomination of little people fighting", God has sent Hurricane Ike to the South Florida/Gulf Coast region, forcing the postponement of September 10th's WEC 36 event at the Seminole Hard Rock Hotel & Casino in Hollywood, Florida to November 5th. "This isn't the first time this has happened," says WEC chief midget wrangler Reed Harris. "God sent down a plague of locusts and made it rain frogs when we did shows in Lemoore, and he turned the water at the Hard Rock Hotel & Casino in Las Vegas into blood. We just reschedule and keep going." WEC 36 will feature champion hamster Urijah Faber defending his belt against leprechaun Mike Brown, as well as a rematch between Paulo Filho and Chael Sonnen.
Posted by Jim Genia at 11:20 AM No comments: 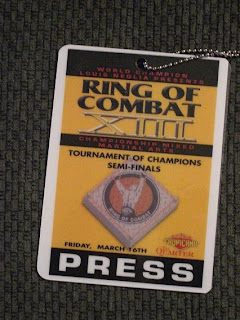 Liddell Succumbs to a Lifetime of Strippers and Group Sex

A lifetime of indulging in strippers and group sex has finally caught up to Chuck Liddell. At UFC 85 on Saturday night, the former light-heavyweight champ fell to TUF 2 winner Rashad Evans' overhand right - a shocking end to a bout most thought the mohawked warrior should have won. "It was the sex," said a source within the Liddell camp that asked to remain anonymous. "Chuck was focused, in great shape, and down to having intercourse with only two women a day. But right before the show we found him in the shower with four groupies, a Penthouse Pet and a cheerleader for the Atlanta Falcons. It was all downhill from there." No word yet on where Liddell goes from here, but it's clear his bid for the UFC's 205-pound title has been delayed.
Posted by Jim Genia at 10:37 AM No comments: