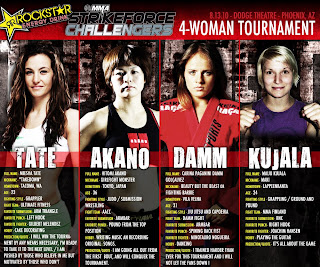 Ridiculous Amount of Female MMA This Week is Ridiculous

First there was Moosin giving us Tara LaRosa vs. Roxanne Modafferi in May.  Then came Bellator, with a few choice female MMA pairings, followed by Strikeforce's Sarah Kaufman/Roxy stunner.  The summer of 2010 has been absolutely killer for those keen watching the ladies throw down, and this week things get kicked into high gear with both Bellator and Strikeforce rocking the women's tournaments.  Bellator is up first on Thursday with the opening round of their 115-pound four-person tourney, and the competitors include top-ranked Megumi Fuji, who will be taking on wrestler Carla Esparza, and Jessica Aguilar, who will be taking on Lynn Alvarez.  Fuji is a shoe-in to take the whole thing, but if we've learned anything from watching these Bellator tournaments it's that no one is immune to getting their ass unexpectedly beaten.  Strikeforce picks up the baton the following night with their one-night 135-pound tournament, and it's packed with big names like Hitomi Akano, Meisha Tate and Carina Damm.  The winner of that little conflagration gets to take on the winner of Kaufman vs. Marloes Coenen, so there's tons of weight attached to the outcome.  The bottom line: there's a ridiculous amount of female MMA this week, and it's ridiculous.  Ridiculous!