With Peter Kaljevic in his corner, self-trained Mark LeCroulant squares off against stocky ninjitsu rep Mario Cowboy. With a ton of posturing and taunting, Cowboy entertains the crowd, but after about two minutes of punishment the realization that he is going to take a beating sets in, and he bows out citing a knee injury. Cool Hearts fighter Casey Bohrman and TSMMA's Melissa Bopp are next. This one is a freakin' thrill ride as Bohrman continually blasts Bopp with pushkicks while Bopp trudges forward with punches. Bopp is clearly losing, but in Round 2 she fires off a roundhouse that lands squarely on the taller Bohrman's neck, sending the Cool Hearts rep to the canvas. The ref waves it off a few seconds later when it's clear Bohrman is still on Queer Street. There are six more bouts left, but I have to pick my daughter up from the babysitter. Sorry, folks.
Posted by Jim Genia at 10:54 PM No comments:

TSMMA fields another fighter in Katlyn Chookagian, who enters the ring to take on Lou Neglia student Andrea DeAngelo. Countering DeAngelo's propensity for wading in swinging bolos with concise and varied strikes, Chookagian takes the decision when time runs out. Longo Competition Team rep John Friedman vs. Wilkie Warrior rep Jay Kellog is next on tap. Clearly a fan of securing the Thai clinch and kneeing foes' bodies into jelly, Kellog batters Friedman relentlessly for the decision.
Posted by Jim Genia at 10:23 PM No comments:

Dragon V rep Yves Derisier vs. Longo Competition Team rep Dean Middlebrook is up next. Middlebrook is making mean faces and flexing like a skinny, white Hulk, but a right hook to the temple ends it for him just 47 seconds in. Congrats to Derisier for the quickest finish so far. Bull Pen fighter Dave Fairley and James DeSantis of the Neglia Competition Team take to the ring. Fairley is the aggressor from the outset, but DeSantis' ability to return fire and land effectively gives him the split decision.
Posted by Jim Genia at 9:51 PM No comments:

Ray Longo-trained Frank Hatsis and Kevin Mullhall-trained Rich Brattole of Jersey Fight Club enter the ring. Hatsis has Luke Cummo in his corner. No word if his waterbottle contains urine. The two maintain a frantic pace for all three rounds, but Brattole has more in his gas tank and keeps Hatsis reeling - which is enough to warrant the decision in his favor. Up next: Eddie Fahey of Dragon V against Giancarlo Vinciguerra of the Neglia Competition Team. For two rounds and 13 seconds Vinciguerra repeatedly tags Fahey in the grill, until finally Fahey lays down on the canvas and the referee calls it. TSMMA star striker Sophia Gegovic enters to take on Cool Hearts' Danika Johnston. This one plays out like a chessmatch, with Gegovic's superior boxing technique and timing enabling her to pick at the game Johnson throughout and earn her the decision.
Posted by Jim Genia at 9:12 PM No comments:

Tiger Schulmann MMA fighter Linda Tarsio takes to the ring to face Norma Armijo of America's Finest. These two dimunitive femmes throw down doggedly for the duration, with Tarsio taking the decision with crisper striking. Alicia Bourne, sister of Jason, from the Wat Gym is up next to take on Champion Fitness' Heather Wagner. Before the bout gets underway Kru Phil Nurse takes a paintbrush and slathers Bourne with Vaseline. We'll see if that is a factor. Hmmm, okay, it's not a factor. What is though is the fact that Wagner brought karate to a kickboxing match, which means she gets knocked on her ass a lot and Bourne takes the decision. Alex Wilkie-trained Steve Sierra vs. TSMMA's Steven Regman is up next. The two go at it hard, but Regman's got the counter-striking edge and he takes the decision.
Posted by Jim Genia at 8:29 PM No comments:

Liveblog: Combat at the Capitale Part 1

MMA Journalist is ringside for promoter Lou Neglia's Combat at the Capitale, an NYC kickboxing event in Chinatown. For those who don't know, the Capitale is a nightclub that used to be a bank, so fighters are locked in a vault and must kick their way out. Okay, not really, but the venue is beautiful and the place gets pretty packed. There are 20 bouts on the card, and first up is a female bout between Daniele Farula of Dragon V Martial Arts and Kasey Matthews of Wing Martial Arts. An interesting thing about Farula... Anyway, for three rounds Farula throws a grand total of seven kicks, 2,000 punches, gets her nose bloodied and wins the unanimous decision. Next is Robbie Guliano of Bull Pen vs. Eric Anthamatten of Premiere Martial Arts. Not Secondary Martial Arts, but Premiere Martial Arts, which is better. Want proof? Look no further than Anthamatten's three knockdowns of Guliano in Round 2 - an automatic stoppage and win for the Premiere rep.
Posted by Jim Genia at 7:58 PM No comments: 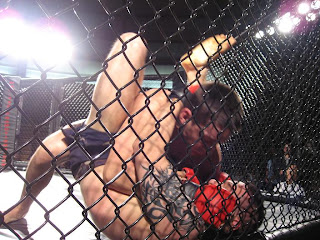 The latest installment of Bellator FC is tonight in Louisiana, and it features the semifinals of the middleweight tournament. Cuban judo star Hector Lombard is taking on Damien Stelly, and then some other dudes are fighting.

Tonight in New York City's Chinatown is Combat at the Capitale, promoter Lou Neglia's kickboxing-only event that usually has a few local MMA stars getting some ringtime to sharpen their striking skills. A preliminary card had Jimmie Rivera and Garrett Carmody on it, but I'm not sure who's on it now. MMA Journalist will be there to liveblog so stay tuned.
Posted by Jim Genia at 4:23 PM No comments: 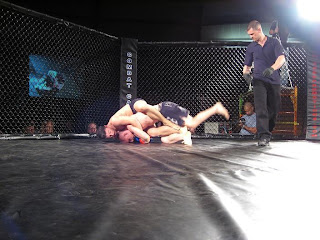 Here's a link to a Bleacher Report article, because, well, why not? http://bleacherreport.com/articles/184961-the-countdown-top-ten-greatest-rivalries-in-ufc-history
Posted by Jim Genia at 12:18 PM No comments: 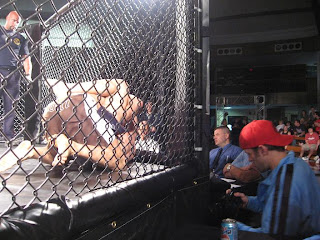 Race Angle to Play No Role at All in TUF 10

The race angle will play no role at all in the tenth season of "The Ultimate Fighter", despite the fact that Quinton "Rampage" Jackson and Rashad Evans have been tapped to be opposing coaches, according to a statement released by SpikeTV. Said producer Emile Whitey Jones, "We are very pleased with how the show is shaping up. No single demographic is being pandered to. This will be a season everyone will find entertaining." TUF 10 will feature a fresh crop of heavyweights only, with a number of contestants hailing from NFL backgrounds. Rumored guest coaches include Nation of Islam leader Louis Farrakhan, Chuck D from the rap group "Public Enemy" and that Rastaman bike messenger who you buy weed from once a month. The first episode is slated to air in September.
Posted by Jim Genia at 11:30 AM 1 comment: