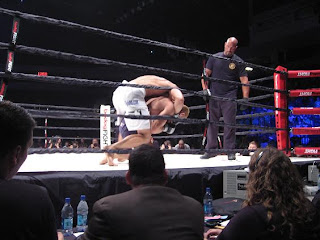 Nick Thompson is a well-rounded competitor when the cage door shuts, but when he squares off against IFL veteran Tim Kennedy on Friday's Strikeforce Challengers: "Santos vs. Villasenor" event, his edge may come from his background as an attorney. According to documents filed in the King County Superior Court, the man known as "The Goat" has petitioned a judge to issue an injunction against his opponent that would forbid Kennedy from using strikes. In addition, a Writ of Habeas Corpus has been submitted that would prevent Thompson's unlawful detention (i.e., Kennedy cannot grapple with him), and a temporary restraining order has been filed with the Clerk's Office that would prevent Kennedy from coming within thirty feet of Thompson's person. All of this makes for a very difficult fight for Kennedy. "I'm not ashamed to admit that I'm a smart mixed martial artist," says Thompson, who, in lieu of a purse, is instead billing Strikeforce for the hours devoted to training and fighting. "I could defeat Mr. Kennedy with my kickboxing or my submissions game, but why risk physical harm when my license to practice law can get the job done?" Strikeforce Challengers: "Santos vs. Villasenor" will air live on Showtime, and also features someone named Santos fighting someone named Villasenor. I think.
Posted by Jim Genia at 3:01 PM No comments: 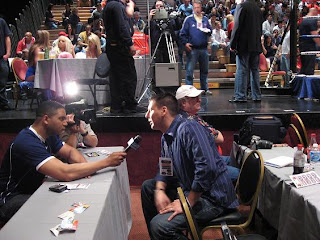 So About That Whole New York Thing...

Yeah, so things sorta ground to a halt in the New York State legislature last week with the Senate having some sort of party coup. Normally, to MMA fans this wouldn't mean much more than a slight case of "Who Gives a Crap?", but as the bill legalizing MMA in New York is supposed to be going through the legislative process right now, the shenanigans up in Albany are painfully relevant. According to the Senate calendar, the number of days left to vote on the bill is dwindling. If time were to run out without the bill getting approval by the Senate (and the Assembly)... well, let's just say there'd be a few more underground shows before the year is through but events at Madison Square Garden would be a ways off.

Thankfully, there's still hope. Over the weekend Governor David Paterson announced that, when this whole senatorial mess is resolved, he was going to call for an emergency legislative session (think: summer school) to make up for lost time. In other words, the bill may become law yet.
Posted by Jim Genia at 10:18 AM No comments: