Anil Melwani, the "official" photographer of the NYC underground fight scene, read an advance copy of RAW COMBAT, and posted a review of it on his site (go here -http://www.mma.us/2011/10/20/raw-combat-a-book-about-real-underground-mma/). Definitely check it out, as Anil's got all the pics you could ever want of that whole illicit world, but here's what he had to say:

"Decades from now, long after MMA has been sanctioned and 'legalized' in New York State, the tales and history of the mysterious and hidden world of Underground MMA would have long been forgotten … but for this fucking book right here. Having personally attended and photographed just about every NYUCL show since the beginning of the promotion (I was originally tipped off to its existance by Genia himself), I can say without hesitation that Jim Genia has masterfully illustrated the smokey and hard hitting nuances surrounding the gritty unforgiving world of Underground Mixed Martial Arts in New York City.

Genia takes you through the emotional and brain bruising journeys of some of the East Coast’s most and least promising MMA athletes, including Frankie Edgar, current LW Champion of the UFC who had his first fight in Peter Storm’s Underground Show. Quick witted and deadly accutate this quintessential story of northeast MMA is a must-read for any fan of MMA and/or Human Cockfighting."
Posted by Jim Genia at 9:37 PM No comments: 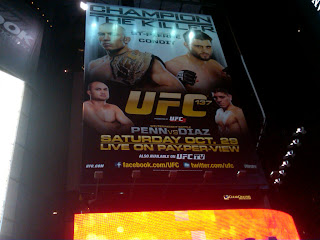 Sent from my BlackBerry® smartphone with SprintSpeed
Posted by Jim Genia at 7:16 PM No comments:

There's a lot of MMA on tap this weekend if you live in the Northeast and aren't afraid to trek to Philly and Atlantic City. Case in point: me. I am totally cool with taking the train wherever the rails lead to, if, at the end of the line, there's MMA there. For instance...

-Locked in the Cage on Friday night in the City of Brotherly Love, which, with the likes of Nick Cottone and Lamont Lister on the roster and Paul Miles spinning the matchmaking turntables, is worth checking out.
-The MMA & Sports Expo at the Resorts Casino in Atlantic City on Friday and Saturday. It's an expo so there's vendors and tons of stuff to do and check out - can you dig it?
-The Cage Fury Fighting Championship on Saturday night at the Resorts Casino. Eddie Fyvie and Sean Santella are featured in the marquee bouts, so that's going to be a big plate of awesome.
-The Take On Muay Thai Show at Bally's in Atlantic City, also on Saturday night. Normally a top-notch New York-based promotion, Take On takes the show on the road for a kickboxing extravaganza.

So yeah, good weekend ahead. Stock up on Clif Bars and make a trip of it.
Posted by Jim Genia at 11:11 AM No comments: