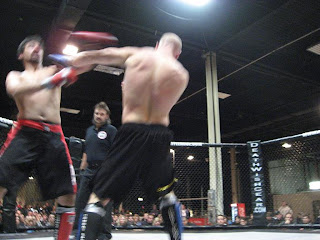 WEC welterweight champ Carlos Condit's rematch with Brock Larson has been scrapped due to injury, an injury so grave that the entire WEC 170-pound class has been scrapped because of it. "Mr. Condit suffered a tear in his 'Big Fish in a Little Pond' tendon," said a spokesperson for the organization, an organization that specializes in hobbit- to rodent-sized MMA athletes. "It's a serious injury, one that can irreparably damage a fighter's credibility, so Carlos - along with everyone else in the welterweight division - will have to prove their worth elsewhere. It's for their own safety." Condit has already been signed to face Marvin Kampmann at UFN 18 on April 1st, with the presumption being that a dose of Octagon medicine is just what the doctor ordered. MMA Journalist wishes the WEC champ a speedy recovery.
Posted by Jim Genia at 12:24 PM No comments: 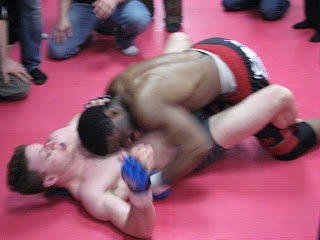 In Case of Riot, Hide Behind Bryan Vetell

This coming Saturday is "The Return of Macaco", a pro MMA event at Newark's Essex County College that features Jorge "Macaco" Patino, an old-school vale tudo legend, returning to combat to square up against Brandon Olsen of Montana - the main event on a card rich with Brazilian talent. In the co-main event, the massive IFL veteran Bryan Vetell takes on Steven Banks of South Carolina, while on the under card Marcus Rodrigues of Sao Paulo, Brazil, faces local boy Anthony Montanaro, Valter Roberto de Menezes of Sao Paulo faces Philadelphia's Lamont Lister, Flavio Roberto Alvaro of Sao Paulo faces Illinios' William Hill, and locals Jay Silva and Plinio Cruz will go at it. That's a lot of Brazilians, and it could translate into a night jam-packed with action. It could also translate into a decent-sized riot. Back in 1997, Renzo Gracie took on Eugenio Tadeau at a Rio de Janeiro event called Pentagon Combat, an event that degenerated into a chair-throwing, fighter-stabbing melee involving everyone in the place. And while MMA Journalist doesn't really expect The Return of Macaco to get as out of control, one mantra will be repeated silently throughout the night: in case of riot, hide behind Bryan Vetell. 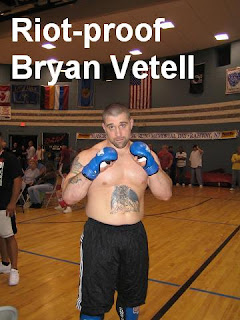 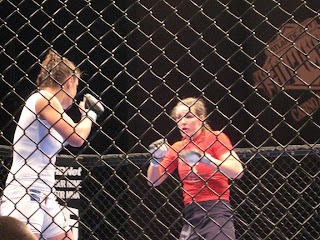