Yeah, There Was a UCL a Couple Weekends Ago.. 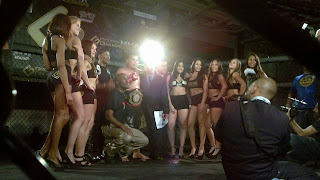 It's been a banner year for Jerome Mickle. First, years of kicking ass in the UCL led to a title shot and championship belt. Then came a title shot in the fledgling New York City-based MMA promotion New York Fight Exchange, which resulted in a KO victory and yet another piece of shiny hardware. If fortune favors the bold, then Mickle - whose aggressive style and "can do" attitude has enabled him to keep an unblemished 9-0 fight record - must be very bold indeed. So who is this explosive welterweight slugger besides being the first person to simultaneously hold championship belts in two Big Apple promotions? To gain some insight, MMA Journalist sat down with the champ for an interview. Enjoy!

Video Promo for this Sunday's UCL