EliteXC. The IFL. Affliction. The dead continue to pile up like insurgents by a Baghdad highway, struggling to set up an IED while a Special Forces sniper picks them off from a rooftop 1,200 meters away. Meanwhile, the UFC races ever onward, and in a few months time the general public will barely recall those who fought courageously for what they believed in (72 virgins, Allah, lame teams named after animals, t-shirts for douche bags) and got their heads blown the heck off. But MMA Journalist will never forget! So here, in no particular order, are the top five wannabe MMA promotions that crapped the bed: 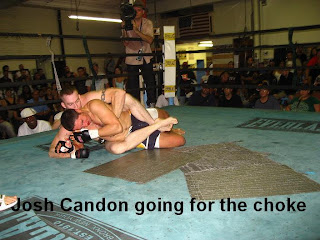 An Open Letter From Kimo Leopoldo

Following last week's "Beau Taylor Is An Incorrigible Midget Debacle", where it was reported that old school UFC veteran Kimo Leopoldo had died of a heart attack and the news spread unabated on the Internet, comes this press release from Kimo. Note: the Hawaiian fighting legend is clearly a member of the undead now - most likely a zombie, although status as a ghoul or other type of cursed spirit should not be ruled out.

While it's unclear what this press release means, the one certain thing is that Kimo still walks among us. So, um, watch your flesh.
Posted by Jim Genia at 2:46 PM No comments: 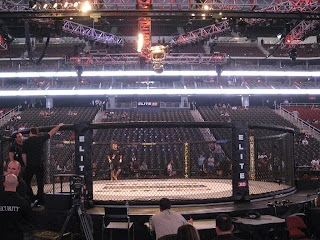 The fighters assembled for Affliction's third event - a star-studded affair dubbed "Trilogy" and scheduled for Saturday, August 1st - are set and ready for war. In the main event, Fedor Emelianenko, the most feared heavyweight on the planet, is scheduled to take on top-ranked contender Josh Barnett in what is sure to be a battle to remember. Who will emerge the victor in this contest between the heavy-handed sambo master and the submission specialist? Also on the card is the pairing of UFC veteran Renato "Babalu" Sobral and Dream tournament winner Gegard Mousasi, the Brazilian Phenom Vitor Belfort against American Top Team star Jorge Santiago, and knockout artist Paul Buentello versus Dutch kickboxer Gilbert Yvel - three bouts guaranteed to provide fireworks galore. Said Emelianenko: "I am honored to be competing for such a stable organization. Dana White can kiss my Russian butt."

Affliction: "Trilogy" will also feature a killer under card, a rock-solid business plan, and a focus on providing fighters with steady employment for a long time to come.
Posted by Jim Genia at 10:01 AM No comments: