Moosin: Forget Sylvia vs. the Strongman - It's All About Tara LaRosa vs. Roxy

The Moosin: God of Martial Arts event is this Friday in Worcester, Massachusetts, and as the promotion decided to go with an ill-prepared strongman in its main event in lieu of an ill-prepared pro boxer managed by Don King, there's actually a chance the show might happen.  But don't let the Tim Sylvia/Mariusz Pudzianowski headliner discourage you from shelling out the dough for the pay-per-view, for the event's got an undercard with some compelling and worthwhile match-ups - not the least of which is the rematch between Tara LaRosa and Roxanne Modafferi.  You see, these two top five female fighters met in the ring back in 2006, at a Mixed Fighting Championship event in Atlantic City (the MFC went on to become BodogFIGHT), and if LaRosa vs. Roxy II is anything like their first fight, it should be action-packed from beginning to end.  The story of their MFC bout was that these two ladies went back-and-forth for the duration, LaRosa continually finding the dominant position and Roxy threatening with submissions throughout, and when it was all over the crowd went wild with appreciation.  This was way before Gina Carano put female MMA on the map and way, way before Cris Cyborg was crowned champ on Showtime.  But thanks to this bout, and the crowd-reaction fighters like Laura D'Auguste, Amanda Buckner and Shayna Baszler were getting, promoters were realizing that there was something to this whole "chicks fighting" thing.  And LaRosa and Roxy played a role in that.  So if you tune in to watch Moosin, don't expect much when the ex-UFC champ takes on the guy who flips giant tires for a living, but when the ladies take the stage, hold on to your freakin' hat.  It should be a barnburner. 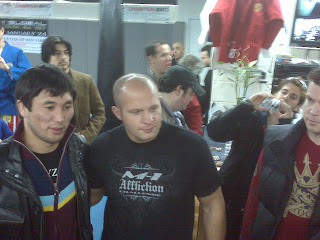