The Man-Love Dry Hump. It looms unspoken, a dirty phrase in the world of mixed martial arts that implies the worst kind of fight for fans to be subjected to, a fight that leaves one feeling icky and gross and uncomfortable, embarrassed, and seeking a licensed therapist. No one wants to see the Man-Love Dry Hump, no one wants it to grace their TV screen, but it happens. When two unskilled, untrained, untalented heavyweights get together, it happens. That dirty phrase, that curse. That pugilistic profanity.

It's the first episode of the tenth season of "The Ultimate Fighter" and we're greeted by coaches Quinton Jackson and Rashad Evans, who sit within the lonely confines of the TUF Training Center arguing back and forth about who is blacker. "I'm blacker," says Jackson. "Aw hell no, I am," says Evans. This goes on for a bit with all the intensity of a nursing home rec room disagreement during nap time. Then the contestants arrive, a slew of heavyweights with varying backgrounds and potential.

There's the ex-NFL guys, big former football players who last fought at that Sigma Alpha Epsilon party back in college when those townies attempted to sneak into the frat house and steal a few plastic cups of warm, putrid beer from the keg. There's Giant Sasquatch Man, who looks like something out of an X-Men comic book but gets winded walking to the water cooler. There's Wes Sims, the comedy relief. There's Roy Nelson, the IFL champ who's far and away better and more experienced than everyone else there.

Jackson pokes Nelson in the belly and declares him fat. Jackson doesn't recognize Nelson, doesn't remember that Nelson fought on an EliteXC card broadcast on CBS. Maybe "Rampage" owns a TV that doesn't get that channel. Who knows.

Dana White arrives and lines everyone up. "Don't make a big deal about this guy," he says of the 16th TUF 10 contestant about to be introduced. "Really, he's just a street fighter," and White throws confetti into the air and pops the cork off a bottle of Moet. "Seriously. I hate him."

Kimbo Slice enters the gym, the last piece of the puzzle. A collective grumble issues forth from the cast, and contestant Brandon Cottonswab admits he wants to "fuck him", a promise of Man-Love Dry Hump that would would prove... what? That Kimbo ain't so tough? That Kimbo wasn't worth the $500,000 he made from his last fight? Does Brandon Cottonswab think that by making lurv to Kimbo he'd be entitled to whatever is in Mr. Slice's bank account?

The coaches must pick teams, and though Jackson makes it clear he wants Kimbo as his first and only pick, there's still the formality of the 16 fighters "trying out" for their slots. Evans, with his training guru Greg Jackson by his side, examines each contestant closely, watching how they punch heavybags, escape from submissions, crochet blankets and cook souffles. Rampage has Tiki Ghosn as his lieutenant and they simply have each contestant step on a scale. They want the biggest because, um, damn. "Size does matter," says Rampage. And somewhere in Chelsea, a gay bar erupts in cheers. Innuendo number one is in the books.

Teams are chosen, with Evans picking people he thinks can win (like Nelson) and Jackson picking people whose names he can spell (Kimbo, Wes Sims). As Evans got the first pick, Jackson gets to make the first match-up. He chooses a forgettable Jon Madsen from Team Rashad to face a regrettable Abe Wagner from Team Rampage.

There are training montages interspersed with glimpses and close-ups of these two heavyweights who are first up at bat, things that are supposed to make us care or at least illuminate why so-and-so is one-dimensional and why so-and-so sucks worse than a Hoover vacuum the size of the Death Star. But if you put a dress and some lipstick on a pig, and maybe a platinum-blond wig on its head and four tiny high heels on its hooves, it's still a pig underneath all that. Just like a Man-Love Dry Hump is just a Man-Love Dry Hump. Which, sadly, is what we get for the season's first fight.

There's blood, plenty of blood, blood pooled upon the Octagon floor as Madsen lays atop Wagner, his takedowns - his sole technique - unstoppable to the lumbering colossus that is Jackson's fighter. Maybe there's whispers, too, of love or hatred, and whimpers of regret (like, why didn't I ever train guard passes? Why didn't I ever train escapes? Was it wise to eat that BigMac before we got here?). And in the end the clock runs out, a sad testament to what may be in store for us for the rest of the season. Madsen has his arm raised, Wagner has a deep gash opened up on his skull, and all we're left with is prayers that someone, anyone of these TUF 10ers, will at least go down swinging. 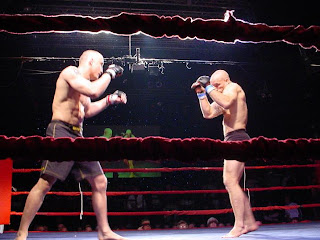 Phillipe Nover's bout with Sam Stout was scratched from last night's UFC Fight Night 19 card when Nover suffered a seizure backstage. How's the "Filipino Assassin" doing? "I'm cool," he said in a text to MMA Journalist. "I'm in good health now. I should see a specialist when I get back to New York and make sure that never happens to me ever again." Added the TUF 9 veteran: "As soon as I can figure out what happened to me and see a neurologist and perhaps even get a few special diabetic tests done, I'll be back." MMA Journalist wishes Nover a speedy recovery from whatever is causing him problems. The dude is a stud and belongs in the cage kicking ass.
Posted by Jim Genia at 9:08 AM No comments: 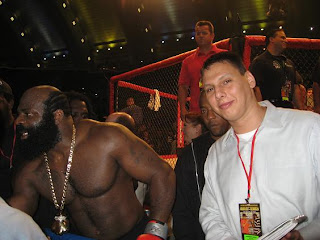