And now the moment most of the Northeast has been waiting for... Lyman Good vs. Hector Urbina. As Good makes his way to the cage he's showered with roses, dollar bills and small children. The bout begins and Good inadvertently knees Urbina in the junk. They restart after a brief recovery period, and Good rocks Urbina on the feet then takes him down and methodically pounds on his from top position. Round 2 opens with Good planting a shin upside Urbina's head, chasing him with flurries and taking him down. They scramble, with Urbina almost taking Good's back, but Good outmaneuvers him and soon has his arm snaked around Urbina's neck with his hooks in. Urbina doesn't tap, and he's left unconscious on the mat at 3:22 of the round. The crowd goes ten different shades of berserk. It's time for EliteXC champ Wilson Reis vs. Henry Martinez of Greg Jackson's School of Nipple Tweaking. Martinez defies logic and reason right off the bat, trying to take jiu-jitsu master Reis down and... God, who knows what he's planning to do. Reis of course goes for the high-level submissions we've come to love him for, and Martinez manages to avoid them until the bell. Round 2 is more of the same, and while Martinez does get some licks in, he's just a submission waiting to happen. Miraculously, Martinez hasn't tapped when time runs out in the third - despite Reis stuck to his back punching him vigorously. Regardless, there's no question Reis has earned the unanimous decision. Last fight of the night is Chris Simmons against Josh Laberge, two New Englanders who I have no knowledge of. They battle back-and-forth on the ground for all three rounds and I resent them for keeping me here this late. Laberge wins the decision. And I'm spent...
Posted by Jim Genia at 10:51 PM No comments: 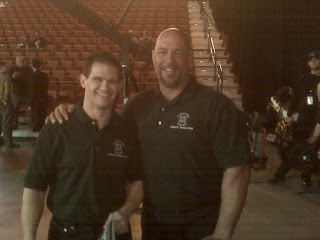 Eric Reynolds vs. Thomas Schulte are on deck - two men whose names sound curiously non-Spanish. Indeed, when they enter the cage it's clear these guys think Taco Bell is the height of Latino cuisine. Anyway, this one is a total clash of styles, as Reynolds is clearly some striking ace fully capable of plastering Schulte with punches whereas Schulte is a grappling specialist capable of coming really, really close to landing submissions. Unfortunately, "really, really close" doesn't cut it, and after escaping Schulte's best on the ground, Reynolds blasts him on the feet until Schulte drops. Referee Mullhall steps in at 4:18 of the first round after Schulte is left a quivering mess of humanity on the canvas. Who are Aaron Romero and Jorge Ortiz? I have no idea, but they're next. Round 1 has the two swinging wildly, with Romero displaying more power at first but Ortiz landing more and more until Romero is all backpedal, all the time. The boxing match continues throughout the second round, and in the third the tedium goes on unabated until the final bell. Ortiz gets the unanimous decision, plus a case of Dos Equis beer and a goat.
Posted by Jim Genia at 9:57 PM No comments: 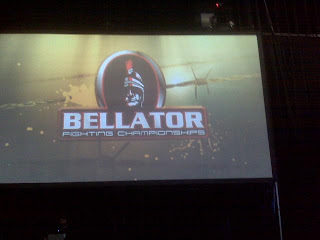 Mikey Gomez and Jesse Juarez are up. Gomez has Renato "Babalu" Sobral in his corner, and like Babalu, Gomez has his hair spiked and looks like he just woke up from a nap. Just kidding. Only Babalu looks like that. Juarez represents Team Bodyshop from Los Angeles... Bodyshop? Like the store that sells lotions and stuff? Round 1 opens with Juarez scoring a takedown and working his ground and pound like a pro. Gomez fires back with a few half-hearted omoplata attempts, and then late in the round the two scramble and Juarez winds up on the Babalu/Gracie Barra fighter's back. He flattens Gomez out and beats on him for the TKO win at 4:23. A pinata is lowered into the cage and Gomez punches it, showering all with Jolly Ranchers and Gobstoppers. After a lull in the action, Omar De La Cruz and Victor Meza take to the cage. Meza is cornered by TUF 9's Santino Defranco, while De La Cruz sports a brilliant 70s-style afro. The first round sees Meza pound on De La Cruz from top position, and De La Cruz play the role of constant threat with an armbar attempt, a rear naked choke attempt and a close omoplata attempt. It's all De La Cruz in the second frame, as he affixes himself to Meza's back and works for a rear naked choke from the beginning of the round to the end. Someone in the audience shouts for "Buckwheat" to put Meza away. The afro is greater than anything Buckwheat could've mustered. Round 3 begins and Meza knees De La Cruz in the chops while De La Cruz is on the ground. He's penalized by referee Senior Miragliotta, given 40 lashes and a jalepeno pepper is forced down his shorts. For the rest of the bout De La Cruz lays and prays atop Meza, cruising to a unanimous decision.
Posted by Jim Genia at 8:55 PM No comments: 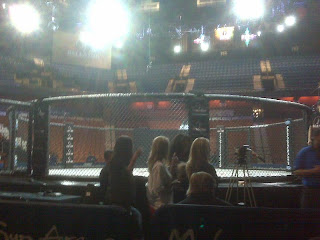 Willie Gates and Jimmie Rivera are making their way to the cage. The arena is about half full, but this is the first bout of the evening so maybe it will fill up more. Rivera is a Tiger Schulmann MMA representive from New Jersey, so as expected he's getting a nice bit of fan reaction. Meanwhile, Gates - the son of Bill Gates - is getting a lot of scowls and hisses. I guess people are still bitter over the last bug-ridden version of Windows or something. Anyway, Round 1 sees Rivera his usual tentative self in the beginning, but once he gets going he's controlling Gates on the ground, transitioning like a beast and hunting for two rear naked chokes. Gates survives, but Round 2 is more of the same with Rivera getting a nice double-leg, slamming his opponent to the canvas and pounding on him intermittently from the mount. The beating continues into Round 3 until Rivera mercifully rolls from mount into a triangle choke. Gates taps at 3:17 of the round. Rivera is showered with chalupas by the ring card girls. Next up: Aaron Tregear vs. Matt Makowski. Tregear hails from Ontario, Canada and is sensitive to jokes about maple syrup and improper relations with moose, so I shall refrain. Makowski is one of the best fighters to come out of Philly and has the kind of striking skills that make people like Chuck Liddell and Wanderlei Silva go "Damn!" The opening round has Tregear muscling Makowski around at first with heavier punching, and Makowski turning the tide with a wealth of a kicks to Tregear's body that echo throughout the venue. Tregear is still in it, though, and in Round 2 he drops Makowski twice with a pair of well-timed crosses that gives him the round despite the Philly son's body-kick onslaught. Makowski resumes his assault in Round 3, and when time runs out he gets the unanimous decision.
Posted by Jim Genia at 7:25 PM No comments: 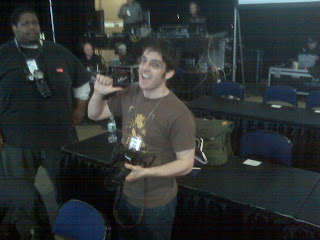 MMA Journalist is cageside at Mohegan Sun for Bellator Fighting Championships Week 2, the second edition of the world's first Latino-centric MMA promotion. Strangely enough, the atmosphere is more like a sporting event than an episode of Iron Ring on Univision, i.e., there are no gangster-rapper-comedians in bumblebee suits. Which, um, is a good thing. On deck are local favorites Lyman Good, Wilson Reis, Matt Makowski and Jimmie Rivera. There's a wealth of media here, both MMA and mainstream, and the backstage food spread is an epic, BodogFIGHT-level assortment of egg rolls, sweet and sour chicken and other Chinese classics. The first bout is slated for 8pm.
Posted by Jim Genia at 6:55 PM No comments: 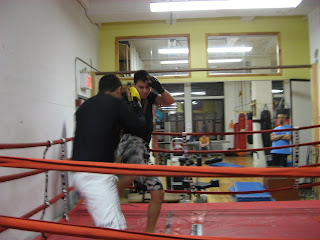 Dana White greets us in his sacred homeland of Las "F-Bomb" Vegas, where he's assembled what will soon be an army of assorted goons and ruffians to confront the invading Brits. And by "assorted" I mean "motley", and by "goons" I mean "tough guys", and by "ruffians" I mean "men that would steal your lunch money and leave you stuffed inside a locker". And by "confront", I mean "live in a house under 24-hour surveillance, while over the loudspeakers Dana's voice is played on a continuous loop of curse words and techno music", and by "Brits" I mean "people that speak in foreign languages and require subtitles for us to understand them". Anyway, Dana says hi. And drops F-bombs. And introduces the Queen of England (also known mysteriously as "Dan" - I guess Rich Franklin is dead?) as their coach for Team America: World Police.

Right away fighters are discarded like human refuse. Someone named My God I Have Herpes On National Television And I'm Never Getting Laid Again is booted, but not before Dana says the word "herpes" about 50 times and brands him with a hot iron and makes him wear a scarlet "H" on his shirt. Someone else is deemed too fat.

Close up of Dana: lost, alone without his British "friend" Michael Bisping. A single tear streams down Dana's cheek. "This is the worst start to the season in the history of the show," he says, but what he really means to say is, "Michael... Michael... I miss you."

Then there are fights. Dana and the Queen of England make two brothers face each other in the cage, and the brothers do, stumbling each other with punches until one of them drops. The winner, Mark Miller, is then forced to cut his fallen sibling's throat, shoot him with a derringer, and back over him with a VW Jetta. Mark is sad but all the while Dana laughs. The perverse laugh of Satan, sitting in a recliner in Hell on a lazy Sunday afternoon, drinking Pabst Blue Ribbon while sins are replayed in slow-motion on a big LCD television.

Close up of Dana, this time with music - slow, wistful music. "I... I miss you, Michael..." Dana mutters, but the Queen of England ignores him, maybe a little embarrassed at Dana's confession.

Someone with a brain aneurysm named Santino Defranco gets into the cage. He apparently wants to fight in the UFC before he dies, but no one has told him that fighting requires him to punch back, as the first round sees him lay down against the fence and let another man beat on him relentlessly. In between rounds Defranco's corner lets him know that he can, in fact, hit back, so he comes out and destroys his opponent. His brain aneurysm pulses. Threatens to explode.

Someone named Steve Berger fights. Steve fought in the UFC back in 2002, so he gets to fight in the Octagon again because the Statute of Limitations has expired or something like that. He loses. Some punk rocker fights, gets beat on, then chokes his opponent out before time runs out. Someone named The Marquis de Johnson defeats Ray Elbow. The canvas is eventually stained crimson with Ray Elbow's blood.

Dana cackles maniacally, but inside he aches. "Michael... my Michael," he says, and adds some solemn F-bombs.

Team American: World Police is almost complete. However, two more potential members still have to fight, and they'll battle it out against some other yahoos next week.

Another tear streams down Dana's cheek. Fade to black.
Posted by Jim Genia at 3:08 PM No comments: 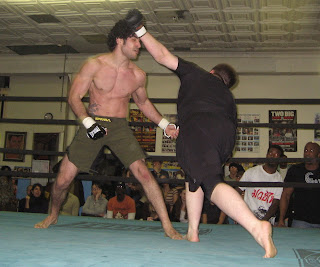 There is another KAPMMA amateur show (the same promoter who brought us "Return of Macaco") tonight in New Jersey. MMA Journalist, however, will be at the Bellator FC show at Mohegan Sun and liveblogging it. Tomorrow night is Strikeforce: "Shamrock vs. Diaz" on Showtime - wahoo!
Posted by Jim Genia at 7:15 AM No comments: