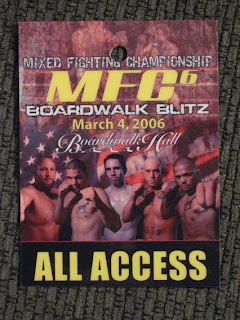 Though rumors abound concerning an impending merger between the UFC and the WEC, those rumors have no basis in fact according to former WEC general manager and newly appointed UFC Minister of Information Reed Harris. "Everything is fine," said Harris from what used to be the WEC's business offices in Las Vegas but what is now a storage facility for boxes of UFC t-shirts, hats and other paraphernalia. "The WEC is as strong as ever, and there is no reason to believe the UFC would ever want to fold the smaller promotion into itself. The UFC has plenty of fighters - certainly enough for a hundred pay-per-views a year!" Currently, the WEC airs on the Versus channel, which few get to see; meanwhile, with its current roster in flux due to a spate of injuries, illnesses and bad luck, the UFC has about three viable match-ups left at heavyweight and maybe ten at light-heavyweight.
Posted by Jim Genia at 9:39 PM No comments: 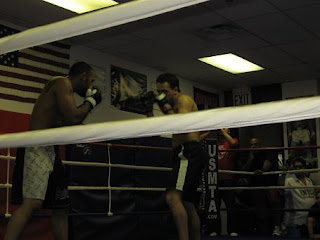 WEC 44 is tomorrow night on the Versus Channel, and I'll be damned if the main event isn't actually something worth tuning in for. Hard-hitting featherweight champ Mike Brown against Jose "I Am Going To Kill You Really, Really Quickly" Aldo? No lie, I've already got goosebumps. Anyway, predictions! 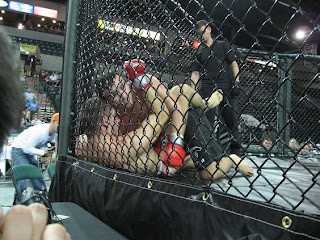