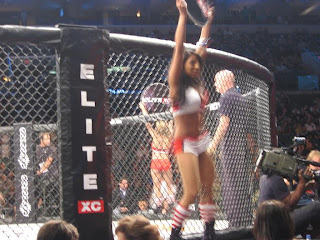 EliteXC 170-pound champ Jake Shields had no problems controlling top UK welterweight Paul Daley on the ground at this past weekend's "Heat" event, but one thing was painfully obvious from cageside (and maybe pretty obvious watching on TV): Shields has crappy stand-up. From his ineffectual strikes to his poor wrestling to his apparent lack of confidence forcing him to shoot from halfway across the cage, a few things can be deduced - such as, he's a knockout waiting to happen. Or, that the first person with a great sprawl is going to give him fits. Or, that Lyman Good - who had signed with the organization last month but has yet to have a fight materialize - would kill him. Yes, Shields is an extremely skilled and talented grappler who has taken out some tough competition in the form of Renato Verissimo and Nick Thompson. But up close, the chinks in his armor are visible. It's just a matter of time before someone exploits them.
Posted by Jim Genia at 3:25 PM No comments: 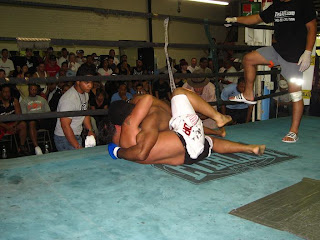 Another episode of TUF, another night of drunken mayhem and coach Nogueira's subtitles. 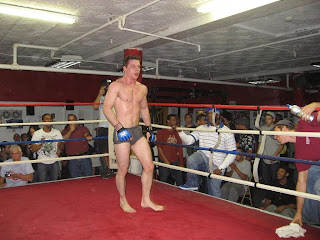 EliteXC's "Heat" event, which featured Kimbo Slice taking on last-minute replacement Seth Petruzelli and losing in stunning fashion on CBS network television, is drawing some major heat from the media thanks to the shocking revelation that Petruzelli was actually paid to fight. In an interview conducted the day after the show, Petruzelli told reporters EliteXC offered to compensate him if he agreed to face their star attraction. He has since retracted his statements. "This is an outrage if it's true," said Kirk Thomas, spokesman for the Volunteer Fighters of America. "If a promoter actually paid money to a fighter to perform... That's just unethical. Something must be done."
Posted by Jim Genia at 9:02 AM No comments: