The Independent World MMA Rankings are tabulated on a monthly basis in each of the top seven weight classes of MMA, from heavyweight to bantamweight, with fighters receiving ten points for a first-place vote, nine points for a second-place vote, and so on.

The rankings are based purely on the votes of the members of the voting panel, with nobody's vote counting more than anybody else's vote, and no computerized voting.

The voters are instructed to vote primarily based on fighters' actual accomplishments in the cage/ring (the quality of opposition that they've actually beaten), not based on a broad, subjective perception of which fighters would theoretically win fantasy match-ups.

Inactivity: Fighters who have not fought in the past 12 months are not eligible to be ranked, and will regain their eligibility the next time they fight.

Disciplinary Suspensions: Fighters who are currently serving disciplinary suspensions, or who have been denied a license for drug test or disciplinary reasons, are not eligible to be ranked.

Special thanks to Eric Kamander, Zach Arnold, and Joshua Stein for their invaluable help with this project, and special thanks to Garrett Bailey for designing our logo.
Posted by Jim Genia at 10:16 PM No comments: 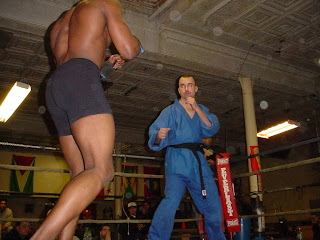 *Editor’s note: Mitch the Intern is an NYU undergrad whose favorite Wednesday night pastime includes the TV in his dorm room, a green beanbag chair and two hits of acid. Enjoy.*

There’s punch drunk, which is a neurological affliction that affects your cognitive abilities and coherence after suffering repeated blows to the head, and then there’s punch intoxicated-like-a-white-trash-uncle-at-his-nephew's-wedding-reception-in-the-trailer-park. Chuck Liddell is the latter.

“The Iceman” is so wasted, athletic commissions give him Breathalyzer tests before allowing him into locker rooms. He’s so wasted, he once mistook a hot dog cart for his car and got 15 miles down the highway before the police pulled him over and informed him of his mistake. He’s so wasted, he’s convinced “Dancing with the Stars” was a fight tournament in .

In short, the man is pure comedy.

First, though, the TUFers are let loose upon their new temporary housing/prison/fishbowl/den of pranks and homoeroticism. Who designs this place? Dr. Seuss? Cypress Hill sprints to a bedroom to claim it but tumbles down a slide made of candy canes into a chocolate pond. Ronnie Kray (yes, the British gangster) picks the room with pictures of assorted fruit on the wall (“These snozzberries taste like snozzberries!”) and Fruit Striped Gum is trapped in a giant glass cube full of bubbles. Congrats, guys.

Then it’s time to pick the teams. Dana is present to flip the ceremonial “f-ing coin”, and coach Tito Ortiz ends up with the first choice. He picks people that mean nothing to us, as we’ve only seen bits and pieces of their fights and none of their training, and Liddell does the same, calling out garbled syllables and gesturing with his hand, even inviting the gym’s janitor, Nevada athletic commission honcho Keith Kizer and a SpikeTV boom operator to join in his cause.

“Is it me or did Chuck’s choices suck?” Dana says to Ortiz when the dust settles.

“I alternate between hating and badmouthing you and liking and respecting you depending upon the stage of my contract,” Ortiz replies.

“I know what I’m doing,” says Liddell, and he picks up a stationary exercise bike, carries it outside and attempts to ride it to the local store for a snack run.

Oh no! Fruit Striped Gum is all banged up from the fight that got him into the TUF House, and he may or may not have a torn rotator cuff, scurvy, scabies and potato famine. Hearing this, Ortiz jumps on his back – literally – and rides him – literally – to, I don’t know, motivate him to work through it? Come across like a douche? Get close to another man? Who knows.

It’s time for choosing the first fight, and as Ortiz got first pick of the fighters, Liddell gets to decide who gets into the Octagon. He chooses Crocodile Dundee versus the water fountain, a decision that leads to confusion. Eventually, Dana convinces him to pick someone else, so Liddell picks Fruit Striped Gum.

Back at the house and it’s prank time! Five-O, Cypress Hill and Ronnie Kray! Air horns! In the middle of the night! Aggravated fighters standing around in their underwear, rubbing the sleep from their eyes and trying to act menacing! Somewhere an entire targeted demographic cheers.

It’s the next day and the doctor lays out Fruit Striped Gum’s MRI and talks about what he sees. “No damage to your rotator cuff, no damage to your muscle tissue, just fluid on your bones, a bad hairstyle and a flavor-stripe down your middle.”

Then we get some insight into Team Liddell’s Crocodile Dundee. Yes, he’s Australian, and apparently is so small, everyone famous there is connected to everyone else. For instance, Crocodile Dundee used to be Steve “Crocodile Hunter” Irwin’s pool boy. He also used to be a roadie for Men at Work, and he once ate at the Outback Steakhouse. Small. Freakin’. World.

Lest we forget that there’s supposed to be some sort of drama between the coaches, Ortiz hangs a piñata that looks like Liddell. It’s tougher and can even fight better than Liddell, absorbing a number of blows to the cranium before going down for the count and being carried out on a stretcher.

Post-fight and Fruit Striped Gum is dejected. Ortiz, ever the coach, pleads for him to join him on the mat for some drilling of the defense to triangle chokes. I guess it never occurred to Ortiz to teach his wards this stuff before their fights, eh? 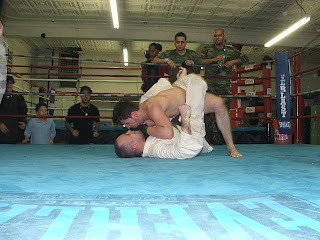