The latest installment of Bellator FC is tonight in Robstown, Texas, and the only real bout of interest will be EliteXC champ Wilson Reis' semifinal match-up against Joe Soto. Whoever wins that one will move on to face the winner of Estevan Payan vs. Yahir Reyes in the featherweight finals. The event will air on ESPN Deportes on Saturday night.

Tonight is another edition of Friday Night Fights in New York City, a fully-sanctioned promotion featuring Muay Thai and boxing bouts. Last I heard, Joe Sampieri - who's taught Muay Thai at Renzo's academy and has fought MMA a few times with mixed results - is on the card.

There's also another Asylum Fight League this weekend. This one is way down in Southern New Jersey at some place called "Shady Katie's". I think Shady Katie's is a strip club. Or a meth lab. Or both. I dunno. Check it out and report back to me.
Posted by Jim Genia at 11:07 AM No comments: 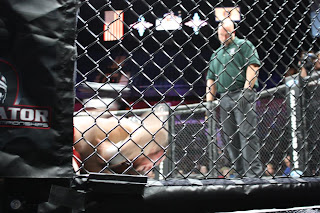 What's Up in New York?

What's going to happen to the Underground Combat League when MMA is sanctioned in New York? Check out this article written by some dude who likes to front like he's some sort of authority or something - http://www.mmamemories.com/2009/05/07/new-yorkers-get-ready.html .
Posted by Jim Genia at 11:04 AM 1 comment: 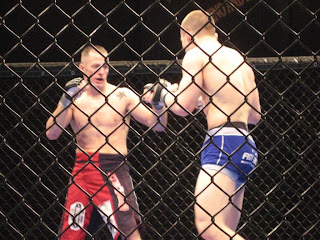 UFC High Exhalted One Dana White and longtime Chuck Liddell-trainer John Hackleman, two of the industry's more recognizable bald men, exchanged barbs over hairstyles yesterday. At the heart of the matter is White's insistence that Liddell shave off his Mohawk after the former 205-pound champ's recent KO loss to Mauricio "Shogun" Rua. According to White, Liddell - once one of the most feared Mohawk-sporting fighters in MMA - is past his competitive hirsute prime, and at the UFC 97 post-fight press conference White stated, "This is the last team you will see Chuck's legendary hairstyle in the Octagon."

"Dana doesn't know what he's talking about," said Hackleman, who in his youth enjoyed a healthy and expansive afro but has for the last 15 years been hairless atop his head. "Chuck's Mohawk is still very capable and very dangerous, and besides, it's up to Chuck to decide what he'll do with his hair. Dana's just jealous his own hairline receded so badly back in 2003."

"I guess John's still saving up for hair plugs," said White in response. "But I know what's best for Chuck. He needs to shave it off."
Posted by Jim Genia at 10:20 AM No comments: 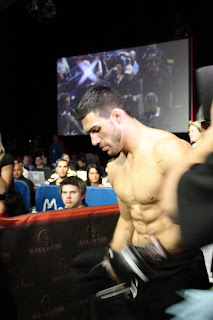