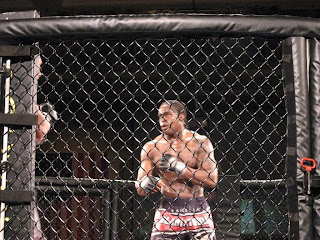 In this week's episode, the very fabric of space and time is threatened, plus more Brits speak with accents so thick they don't even understand themselves.

Tanned, rested, well-coiffed and friendly like a soccer hooligan is friendly, Michael Bisping greets his wards and puts them through their paces in a hard training session. His coaches are introduced - someone named "Sucker" to teach grappling, some unassuming bald guy to teach striking - and his team of countrymen/aspiring UFCers sweat and grunt and then hug each other and drink tea from porcelain cups, their pinky fingers jutting out as they say "jolly good" and "know wha' ah' mean, gov'nor?"

Back at the TUF house there are pranks. Tame, non-gay pranks. A Brit's t-shirt is defaced. And back at the gym, a Brit's shoes are written on. In the control room, a producer with a headset watches the dailies and shakes his head. Says to a young production assistant: "Nope. Not gay enough." The production assistant nods. Says to the editor: "Cue up the 'Meat Missile' clip."

Mark Miller looks into the camera and declares himself a 'Meat Missile'. All targeted demographics are hit.

It's fight day, and Miller and Ostrich enter the cage. They kick and punch and roll around, and late in the second round Ostrich makes his British teammates proud by planting his shin upside the American's head. Miller drops to examine a spot on the canvas that has suddenly become very interesting to him.

Later, the Queen of England confronts Miller. "I thought you said you didn't suck?" she says. 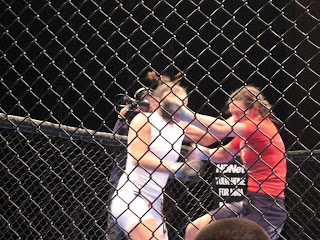