Can a fight show survive after its earth-quaking Kimbo Slice wad has been shot and everyone, from producers to production assistants to cameramen to sound guys to fighters and coaches and athletic commission officials, are struck by the sudden urge to smoke a cigarette and see what's munchable in the fridge? Can the show go on? And will viewers have a reason to tune in?

After an extended recap of Kimbo's noble and valiant effort against the evil Roy Nelson, we're treated to more of the former backyard brawler talking intimately with his TUF house roommate, Abe Wagner. "I don't feel like I've been eliminated," says Kimbo.

The battered Wagner - whose ass got stomped first this season and is now just counting down the days until he can go back home and manage that Walgreens - stares at him incredulously. "I think this is your coping mechanism for having lost," Wagner offers up, but if he says more, his words are lost once Kimbo starts flexing his biceps and stroking his beard, two actions that elicit "oohs" and "ahhhs" from the off-camera production crew.

Will Kimbo re-enter the competition? For that to happen, one of the remaining contestants must drop out, an idea that induces SpikeTV execs to begin stocking the TUF house with poisoned food in boxes labeled "NOT FOR KIMBO". But before any of the tainted food can be eaten, ex-NFL player Marcus Jones is stricken by a bad case of ZEROTALENTTHISSEASON, a disease that suddenly drenches him in sweat and prompts Kimbo to perform CPR on him. At the prospect of Kimbo getting to fight again, cheers erupt from the crew, cheers that fade when Marcus Jones recovers.

"Let me step up," Kimbo says to the camera. "Tag me in and I'll guarantee SpikeTV so many viewers, the network's ad sales will get ridiculous." And outside, an executive in a three-piece suit hides in the bushes with a lead pipe, ready to kneecap the first fighter he sees.

At the TUF training center coach Rashad Evans is putting his wards through their paces. He begins to narrate, describing the fighters' strengths and abilities as if he were the leader of a commando unit and these were the soldiers chosen for the upcoming mission. "Justin Wren is a master of demolitions," he says. "He also likes long walks on the beach and can juggle while riding a unicycle." Cut to Brendan Cottonswab, who's lying on his stomach, carefully lining up thousands of dominoes. "Brendan is a sniper. He can also speak old Latin and once crocheted me a sweater out of saved pocket lint." The camera switches to Matt Minestrone. "Matt throws knives. He's also an Italian, tomato-based soup comprised of vegetables and either pasta or rice."

Cut to coach Quinton Jackson. It's his turn to narrate while his fighters have their training montage. "Scott Garbage? He big," says Jackson. "Demico Rogers? He big, too." A series of clips of Marcus Jones stepping on bugs. "Marcus Jones?" says Jackson. "He very big." And that's that.

Back at the TUF house and Matt Minestrone blabs about the match-ups coach Evans has in mind. Somehow this is a big deal. Maybe because no one could've come up with these logical match-ups on their own, or maybe because there are so many fighters in the house and so many match-up permutations available that no one in a million years would've ever guessed that Fighter A would have to face Fighter B. Who knows. Anyway, Matt Minestrone's teammates give him grief about blabbing.

In coach Evans' den of unknown trainers, Matt Minestrone apologizes for letting the cat out of the bag. Evans' accepts his apology and dismisses him, but once Matt Minestrone leaves he ponders aloud, "Is he dumb?"

"No, he's just a tomato-based soup comprised of vegetables and either pasta or rice," says one of his assistants.

It's time to announce the match-up for the next fight, and coach Evans picks Brendan Cottonswab to face Demico Rogers. To prepare for the bout Brendan Cottonswab walks around the cage with one of the team's assistant coaches telling him how awesome he is. "You're so awesome," whispers the coach. "You're so awesome, you are the yardstick by which 'awesome' is measured. Go to Wikipedia and type in 'awesome' and it links to a picture of you. Dude, you are both 'awe' and 'some', which, when mixed together, makes a volatile elemental compound known as 'Awsm'. When you add water to 'Awsm', it explodes in pure 'awesome'."

On the Team Rampage side, assistant coach Tiki-Tiki-Head (yes, he's a giant wooden statue of a head - awesome, huh?) advises Demico Rogers to "explode all over his opponent's face." Sigh.

It's almost fight time now, and in the Team Rashad locker room there's hooting and hollering and Brendan Cottonswab is showered with streamers while chicks in bikinis sing karaoke. In Demico Rogers' locker room, coach Jackson is nowhere to be found. Instead, they sit around gloomy and morose, reading old 'Sandman' comic books.

Then they fight. Demico Rogers takes the reins initially with a takedown and some ground and pound, passes guard to drop more leather, and gets greedy and tries to attain mount. Brendan Cottonswab reverses him, slips on an Anaconda Choke and taps him out. Demico Rogers is distraught, and remains on his knees with his head bowed in the Octagon. Coach Jackson ignores him, or perhaps forgets that he's actually one of the coaches this season, so Evans kneels down and consoles the defeated warrior.

Afterwards, Jackson gathers his staff in a room. "Guys, I don't feel so good. We keep losing."

"Really?" says Tiki-Tiki-Head. "There's a bad case of ZEROTALENTTHISSEASON going around. Maybe you have it." 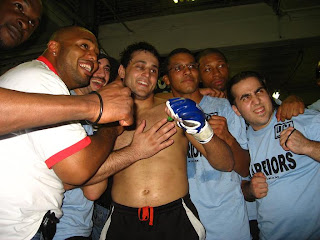