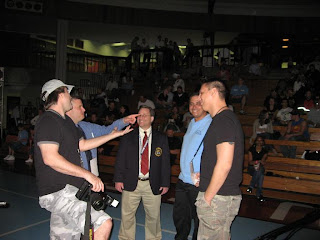 In conjunction with his promotional tour for the release of the "UFC 2009 Undisputed" video game, UFC Giant Tiki-Tiki Head Dana White will be appearing on the "Late Night with Jimmy Fallon" show tonight in New York City, as well as ringing the closing bell for the NASDAQ stock exchange. According to a statement issued by Zuffa, White will also be selling hotdogs at the 72nd Street & Broadway Gray's Papaya location at midday, using the toilet at the world-famous Macy's department store in midtown, vomiting on the sidewalk in front of where CBGB's once stood on the Bowery and hawking stolen car stereos under the Manhattan Bridge in Chinatown. If his schedule permits it, White will also stab a pedestrian in Morningside Park and pass out in a hooker's apartment in the Frederick Douglass Houses low-income housing projects.
Posted by Jim Genia at 12:45 PM No comments: 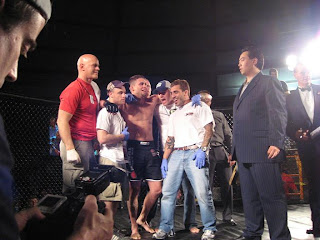 Q & A with Mirko CroCop's Shin

With the recent news that Mirko CroCop may be returning to the Octagon for UFC 99 in Germany, MMA Journalist tracked down the once-feared Pride star's shin for an interview. Always willing to talk, CroCop's shin addressed a number of issues, including up-coming opponent Mustapha Al-Turk and the pressure of performing. 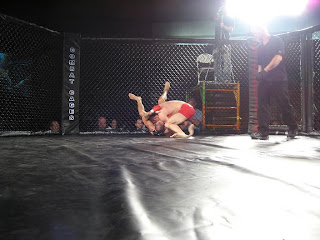