Middleweight TUF 7 winner Amir Sadollah's bout against ROC champ Nick Catone, which was slated for the main card of Saturday's UFC 91, has now been cancelled according to the UFC website. The reason behind the last-minute cancellation is a self-inflicted leg injury, which was sustained when Sadollah purposely jumped into the path of a charging ram. Said Sadollah's trainer Dirk Frankenbaum: "I don't understand it. The training camp was great, everything was great. Then last night we showed Amir some footage of Catone's fights, and Amir ran out back and met up with that ram." Added Frankenbaum, "I guess Amir really didn't want to fight him." The preliminary match-up between Tamdan McCrory and Dustin Hazelett will now be moved up to the pay-per-view broadcast.
Posted by Jim Genia at 4:01 PM No comments: 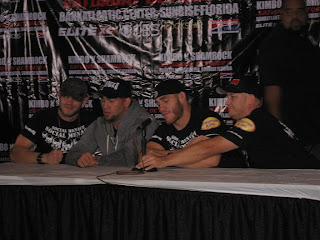 In an exclusive imaginary interview with MMA Journalist, Brock Lesnar, who squares off against heavyweight champ Randy Couture this weekend at UFC 91, has revealed that he is an abuser of leprechauns. The former WWE wrestler, who earned his shot at the UFC title with a mere 2-1 fight record, describes a darker aspect of himself that most fans probably don't know - an aspect that fans maybe don't want to know. Here's an excerpt from that shocking imaginary interview: 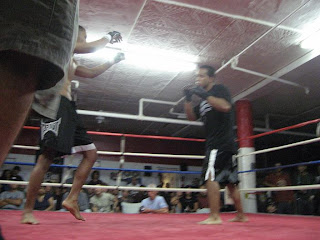