Reports have surfaced today that Sheik Dana Al-Whitefa may be considering allowing superstar female fighter Gina Carano to compete in the WEC - a move that would be contrary to the devout Muslim teachings Sheik Al-Whitefa has previously espoused. In a recent interview with Yahoo Foreign Minister Kevin Iolaziz, Sheik Al-Whitefa was quoted as saying, "The cage is no place for a woman. Praise be to Allah." Allowing Carano into the WEC would, without question, be a radical shift from that viewpoint, although one that may be warranted given Carano's immense popularity. As of this writing, it's not known when Carano would make her WEC debut, but it is known that as a condition of her participation, the former EliteXC fighter would have to wear a traditional Muslim burqa with a veil concealing her eyes. Any violation would be met with immediate stoning.
Posted by Jim Genia at 3:39 PM No comments: 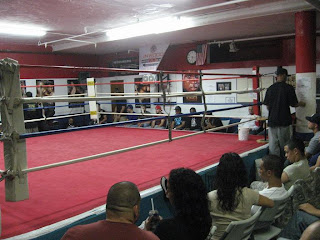 Lou Neglia's Ring of Combat 22 is this Friday at the Tropicana Casino & Resort in Atlantic City, and the Garden State promotion will feature three championship contests atop a card full of tough East Coast fighters. But just who are the men competing at ROC 22? MMA Journalist has delved beyond the records and cold statistics and compiled the following list of fun fighter facts: 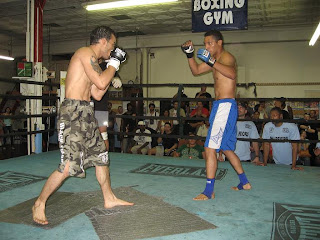 Strikeforce is the New Black

You can tell when reality has set in when people start aiming lower. If you go over to http://FiveOuncesofPain.com, there's a post up talking about a new East Coast promotion called the World Cagefighting Alliance, which will debut on February 6th at Boardwalk Hall in Atlantic City and "will adopt the same business model as Strikeforce". Strikeforce, eh? I guess the days of organizations trying to be the next UFC are gone - which isn't exactly a bad thing, as so many of these wanna-bes have crapped the bed and left disappointed fighters and fans in their wake. But Strikeforce's success as a super-regional West Coast show is definitely a realistic goal for anyone with a competent staff and viable product. Heck, even veteran promoter Monte Cox has claimed he aspires his Adrenaline promotion to be the "Strikeforce of the Midwest". I guess Strikeforce is the new black.
Posted by Jim Genia at 10:33 AM No comments: