IFL veteran and all around Northeast stud Deividas Taurosevicius has signed on to face Mark Hominick for the August 1st Affliction: "Trilogy" card, and the Lithuanian-born grappling ace is sure to test the Canadian kickboxer's ability to enunciate. Sporting a moniker that has felled the likes of Bart Palaszewski, Savant Young and Dan Lauzon, Taurosevicius has proven to be tough as nails with a razor-sharp submission game - a game matched only by his nigh-inarticulable name in terms of dangerousness. "We're pleased to set up this featherweight match-up," said Affliction Head Seamstress Tom Atencio. "Mark Hominick and Deivi... Deivid... urk!" Atencio then suffered a fractured tongue. No word yet on his condition.
Posted by Jim Genia at 4:25 PM 1 comment: 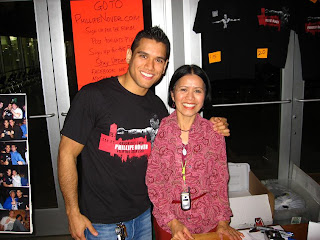 The inaugural "UFC 100" brochure has hit the newsstands, and like any piece of great journalism, this homegrown publication doesn't shy away from tackling the issues and asking the hard questions. In this edition (the first of what could be many such informative brochures if the public is willing to pay for them), readers will learn:

In addition, the UFC brochure is packed with quotes, tips and photos from all your favorite Dana White moments - plus a pull-out centerfold of the man himself. Buy now!