Apparently, you have to actually want to be a fighter to become an "Ultimate Fighter". At least, that's what last night's episode taught us.

Close up on Team America: Word Police, training hard while the Queen of England (um, Dan?) talks so slow that her words are almost backwards, like "Hi guys, don't forget to train hard" is really "Ih syug, t'nod tegrof ot niart drah." Also, moss has started to grow on the Queen. We'll see where that goes.

Anyway, the American symbol of depression Jason Pierce sits despondent in a corner, shrouded in misery and blue like that smurf that hated everything is blue. His leg is infected with staph. Will he be able to fight? "I hate fighting," he replies. "I hate legs, too." Pierce pretty much hates it all.

Meawhile, Michael Bisping trains with his ward David Faulkner, with Faulkner's gag reflex the center of attention. "I hate stuff in me mouth," says Faulkner, and cheers erupt in a gay bar in Miami, then everyone does a shot and smacks the ass of the person to their right.

It's Frisbee time! Last week it was tennis, but this week, with no money on the line, Team America: World Police plays Frisbee. Stay tuned for next week, when hackeysack takes center stage.

Back to Pierce, who visits a doctor for his depression and is diagnosed with negative energy syndrome, a disease that affects millions every day and is the leading cause of black holes and trolls who live under bridges. The Queen of England declares her disdain for negative energy, but it comes out as something garbled that only ancient turtles and trees can understand. Vines now dangle from her almost inert form.

But like a hot dog dangled before a fat kid who hasn't eaten in hours, we don't get to see Pierce fight this week. Instead, Team America: World Police representative Jason Dent is paired up with ex-Monty Python member Jeff Lawson. Lawson provides the much needed comedic relief in that pressure cooker known as the TUF house, with most of his antics centering around skits involving him dressed as some sort of big-eared animal interacting with Mexican wrestlers. Also, we get to see his exposed butt (and in that gay bar in Miami, everyone cheers, does a shot and smacks the ass of the person on their right).

Suddenly it's fight day, and everyone heads to the TUF training center to prepare for battle. Dana White shows up, apparently aware that Pierce hates everything, and pulls him and the Queen of England aside. "How is your staph-infected leg?" asks Dana, adding a string of F-bombs and some colorful profanity.

Dana dismisses them, then we're subjected to a sloppy MMA bout that sees Lawson on top in Round 1, trying fruitlessly to get a submission or drop leather but really looking like someone who has only heard MMA described and never actually seen a bout. Lawson runs out of gas in Round 2, though, and Dent applies an Anaconda choke to end the Brit's run at TUF glory.

Back to Dana, who's had time to mull over Pierce's responses and hatred over everything. He calls Pierce and the Queen back into a secluded room. "You don't want to be a fucking fighter, Pierce, so you're done." Pierce weeps a little, but then realizes he hates weeping, and moves on. The end.
Posted by Jim Genia at 4:39 PM 1 comment: 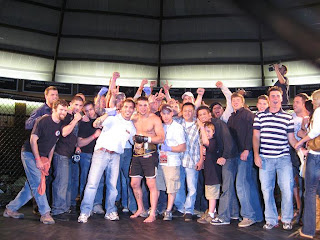 Point/Counterpoint: The Country Breakfast vs. The Spaghetti Dinner

Point: The Country Breakfast- Woo-wee do you have a hard day on the farm ahead of you! Already you've cleaned out the hen house and fed the pigs, but now that the sun is up you have plenty of other chores to take care of - like milking the cows and chopping some fire wood. So why don't you sit right down over there and dig into that fresh stack of steaming pancakes. Want some maple syrup with that? Here, eat some of these sausage links and bacon strips, too. Also, don't forget to change the hay in the horse barn, and I believe the new parts for the combine have arrived at the general store in town, so don't forget to pick those up. Care for a bowl of oatmeal? There's sliced banana mixed in there. And have some of these scrambled eggs - they're a little runny, which is just how you like them. Did you hear that tree go down in the storm last night? It sounded like it was along the northern edge of the property, and if it fell and busted up the fence, well, that fence is going to need fixin' or else them sheep'll get out. Why don't you check on that, too? But first, I have a waffle and some biscuits ready for you. Eat up, boy!

Counterpoint: The Spaghetti Dinner- Bonjourno! How nice of you to drop by! I heard you were coming so I laid out a nice antipasti. It's got your favorite - melon wrapped in prosciutto - and when you finish with that there's some fried calamari with marinara. Mange! Mange! You look so thin these days. Are you getting enough to eat? Here, have some spaghetti - al dente, just how you like it. And here, have two-three meatballs. Mama-mia, those meatballs are good! Three kinds of meat in there, with garlic and basil and just the right amount of love! Mwah! Here, have some escarole with that. It's good for you. And when you're done, I've got some cannolis in the ice box. That's-a my boy!
Posted by Jim Genia at 4:12 PM No comments: