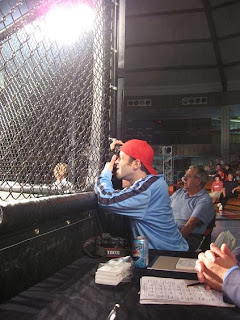 Will Matt Minestrone, a man most consider an Italian tomato-based soup with a hodgepodge of vegetables, fight? Will Kimbo Slice, a man most consider the greatest fighter to ever rub up hard against Nielsen ratings and advertisers, return to action? Do we have to watch another painful talentless-heavyweight bout? Can't we just give the coveted six-figure "Ultimate Fighter" contract to Roy Nelson and call it a day? Most of these questions and more will remain unanswered in this week's installment of "Dancing with the Overweight Stars"!

Fade in to the TUF training center, and coach Evans is feeling the love. His team very nearly swept the opening round of the competition, and now everyone hugs and kisses freely and gives each other backrubs like they did in ancient Sparta when no girls were around. "I'm feeling the lurv," says coach Evans aloud.

But just then Matt Minestrone enters, limping, clutching his skull, staring off into space with unfocused eyes and trailing a strand of spittle from the corner of his bottom lip. You see, Matt Minestrone had a tough fight against Scott Garbage and emerged with a little wear and tear, so he spent the night in the hospital. Is he actually hurt? Maybe. Or maybe he's just faking. Or maybe he's just developmentally disabled and only now are people noticing it. When coach Evans asks him if he's okay, Matt Minestrone unloads with his own personal diagnosis.

"Uh, I have brain swelling."

"I mean I have a detached brain stem," Matt Minestrone interrupts.

"What?" and coach Evans looks at him incredulously, a "What'chu talkin' 'bout, Lewis?" hanging unspoken in the air.

"I mean I have epilepsy," says Matt Minestrone. "And malaria. And paranoid schizophrenia. And potato famine."

Coach Evans shakes his head. "Man, you are a bufoon."

Cut to Kimbo Slice, who is this season's only shining star and the center of the TUF universe that all SpikeTV producers, production assistants, editors, interns, and craft services people exist in. Coach Jackson and Tiki-Tiki-Head (yes, his head is a giant wooden Hawaiian statue of a head. Good grief.) are training this bearded celestial body, this black emperor of the coveted males 18-34 demographic, training him with the assumption that if someone needs to fill in for someone else, there is no other viable choice but Kimbo. ("I'll step in and fight again," says Scott Garbage, and he's promptly pepper sprayed.) But oh no! Kimbo may have injured his knee! Dial 911!

Dana White, upon hearing about Kimbo's injury, flies in the best orthopedic surgeons money can buy. In a cybernetics laboratory in Japan, work begins on a new limb for the former backyard brawler. A SpikeTV executive dressed in white cotton robes sacrifices a goat. Entire chapels in Las Vegas are ordered to pray, pray, pray for Kimbo's knee. "I'm hurt," says Kimbo. "But I will fight." And the sounds of a thousand bottles of champagne, uncorked all at once.

Oh yeah, there's a coaches challenge to get over with. Thus far in the show we've seen ping pong, bowling, soccer, tennis, basket weaving and pastry making as challenges. What is it this time around? Why, beach volleyball, of course.

Yawn. The duo of coach Evans and assistant coach Mike Van Arsdale beats coach Jackson and Tiki-Tiki-Head two games to one. Sigh. Wake me when the challenge involves pistols and 20 paces, or those weird-shaped Klingon blades and that cheesy Star Trek music meant to imply high stakes and drama.

"I've got to be honest with you," says Dana White to the camera.

More Kimbo, and this time the TUF housemates are "helping" him rehab his knee with a series of homeopathic remedies mixed in with practical jokes, such as having Kimbo sit in a tub full of ice water, then a tub full of lime-flavored Jell-O, then a tub full of Frosted Flakes (to which Wes Sims adds milk). And through it all, Kimbo laughs like the good sport he is. Oh you guys!

"Do you want to fight?" coach Evans asks Matt Minestrone. If fans are going to have a reason to tune in, they need to know if Kimbo will be stepping in for Matt Minestrone now. Okay, not really. This is the sort of thing that should, and will, be dragged out forever.

"I feel like you're pressuring me into fighting," says Matt Minestrone. "I mean, this show is called the Ultimate Fighter, but if I don't feel like fighting, can we change it to 'Ultimate Ex-NFL Guy' or something?"

"I hate you," says coach Evans.

And then there's this week's fight, which pits wrestler Jon Madsen against Brendan Cottonswab. Surprisingly, it's much less painful than the other fights we've seen, with Madsen going for takedowns and ground and pound and Senor Cottonswab scoring a knockout in Round 2. You almost miss the dry humping and the hugging against the cage that we've come to know and love… okay, not really. It's not missed at all. 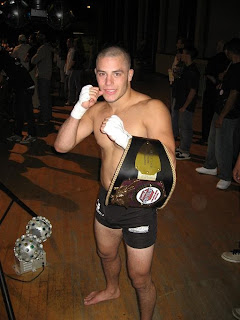 Observations From My Couch: WEC 44 "Wow!"