Courtesy of Anthony "The Duke": "Shane is awake and talking now, though he is heavily sedated and still in the ICU. His condition is still critical but stable. Doctors are worrying about infection, that is why Shane is still in the ICU. Shane's speech is improving, probably slurred by the drugs they have him on. Shane lifted his arms, despite his injuries. He talked with his family and even watched a little TV. Shane is making excellent progress in his recovery and he has a very positive attitude towards his situation right now.

There is a benefit concert for him in Reading, PA. Link to my site for flyer and information (http://anthill1.blogspot.com)"
Posted by Jim Genia at 4:37 PM No comments: 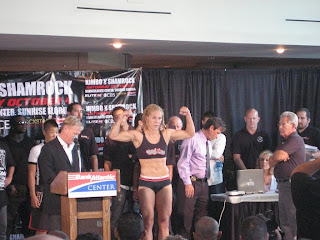 If the sport was in its infancy in 2002, then the concept of women competing in MMA was barely clearing the birth canal. But Laura D'Auguste was ahead of her time, and in events like New Jersey's Ring of Combat and Reality Fighting and Japan's Smackgirl, she was racking up wins against top lady warriors such as Amanda Buckner, Roxanne Modefferi and Megumi Yabushita, putting the world on notice that a bout featuring two females waging war was every bit as exciting as seeing a clash between two men. What made D'Auguste special? The truth is, D'Auguste could really grapple - so much so that she'd compete in men's divisions at NAGA tournaments. Her skills on the mat (honed to a razor's edge at Tiger Schulmann fight team sessions) translated into an undefeated MMA record and a berth at the prestigious 2007 Abu Dhabi Combat Club Submission Wrestling World Championships, and by July of that year she was widely seen as the best 135-pound female fighter on the planet. Sadly, it's been a two years since D'Auguste last saw action. A split from Team Tiger Schulmann prompted her to join Romulo Bittencourt's Brazilian Jiu-Jitsu academy in Newark, while an injury had her bow out of a potential BodogFIGHT match-up against Tara LaRosa. Add to that a new marriage, and the full-time cardiovascular nurse no longer seemed to hold MMA competition as a priority. Which is a shame, because thanks to her, the East Coast was at one time the center of the female mixed martial arts universe.
Posted by Jim Genia at 2:58 PM No comments: 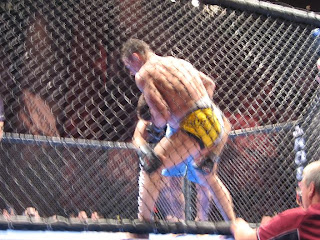 Will you be near Buffalo, New York on December 13th? Do you have a digital camera capable of taking about three pics? Can you tell the difference between an armbar and a leglock? If so, then MMA Journalist wants you to cover a pro/am show by Knockout Productions called "There Will Be Blood". New Jersey superstars Kevin Roddy and Steve DeAngelis are fighting, as is Lance Evans (TUF star Rashad Evans' brother). How much does the job pay? Zero! But you do get the writing and photography credit, plus, thanks to your all-access press pass, you get to keep whatever you can steal from the fighters' locker rooms (note: they will kill you if you get caught). If interested, send an email to mma_journalist@yahoo.com.
Posted by Jim Genia at 10:15 AM No comments: