Close up shot of Dana White, driven down the mean streets of London to the gym where Michael Bisping practices his best Brad-Pitt-in-"Snatch" accent and sips tea and eats crumpets. They hug, long lost friends in a world where friends curse a lot and feign machismo, and they enter the gym where others of various degrees of fighting prowess and incoherent accents all want to be Dana's friend. "There are 16 of you but only eight are flying back to Las Vegas," says Dana, implying that the others must swim. Or stay there, where their accents will remain unfettered by the shackles of grammar and communicative ability.

"Jolly good," says one, a young lightweight with a handlebar moustache and a bowler atop his head. His name could be Gary Kelly or Grace Kelly or something, and he apparently trains with Bisping, as when he gets knocked out by a fighter from Narnia named Andre Winner, Bisping curses, saying "bollocks" like it means something dirty but it makes me think of buttocks. I laugh. Subtitles dance across the screen whenever a UK fighter talks and I laugh some more.

Others fight, one after the other entering the cage to earn a berth on Team UK, which will match up against Team US this season. Cageside, Dana and Bisping laugh and joke and share odd embraces, while Rich Franklin and the Queen of England sit taking notes (the Queen is sometimes referred to as "Dan". It's never explained why.) Within the Octagon, an assortment of fighters hailing from various UK neighborhoods like Nottingham Forest, the Shire, Middle Earth and Earthsea do battle. A shapeshifting referee, sometimes appearing like an over-tanned Mr. Clean, other times appearing like a smaller man who constantly says "lad", oversees the action.

Meanwhile, Dana and Bisping giggle and whisper in each other's ears, then giggle some more.

Someone with a dire need for a plastic surgeon (or a better plastic surgeon than they already have) talks a lot but loses to a British Mr. T of the A-Team. A member of the Sex Pistols fights, another friend of Bisping except this time Bisping declares that he sucks amidst chuckles and snickers as he and Dana poke and tickle each other like friends are oft to do. Despite his suckiness, the Sex Pistol (Sid Vicious? Johnny Rotten?) wins. Then there are no more fights, and the eight remaining competitors are given jerseys by Bisping and Dana says the F-word. Maybe it's gratuitous, maybe it's necessary. I don't know. Just then, the acid kicks in.
Posted by Jim Genia at 1:05 PM No comments: 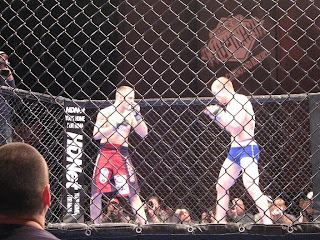 New York State Assemblyman Bob Reilly, the most vocal and most ill-informed of the opposition to legalizing MMA in New York, sent around a memo called "The Case Against Ultimate Fighting in New York State". In it he asks that people ignore the studies showing that MMA would bring revenue to the state and instead believe his reasoning that it would hurt New York's economy, and he decries the impact more violence would have on our society. It's 24 pages long - all of it drivel - and here are a few gems: 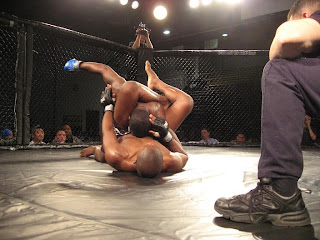 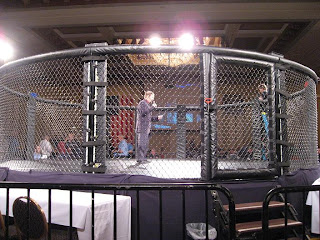