Close up of Dana White, martini in hand as he stands on a balcony overlooking the Bellagio. Below, the famous choreographed fountain, and as a gentle breeze dances past he looks back at those gathered around him: George Clooney, Brad Pitt, Matt Damon, Don Cheadle, Michael Bisping, token Asian dude and some old man. "Gentlemen, I have a plan to knock over the vaults in three casinos," says Dana. "Do you want to be a fucking thief?"

Back at the TUF house, Team America: World Police fighter Cameron Dollar-Dollar-Bill-Y'All tries desperately to overcompensate for something. What could it be? "I've humped 70 or 80 girls, man," he says, effeminately stroking himself while humming bars of ABBA's "Dancing Queen". "I don't even know how many girls I've humped," he says as he wraps a pink feather boa around his neck. "I even humped my best friend's wife." A pause as he dons a pair of purple, rhinestone-studded sunglasses. "Seriously, fellas, I am so not gay."

Meanwhile, Don Cheadle buys an enormous drill and starts digging a tunnel under the Golden Nugget, while George Clooney compliments Catherine Zeta-Jones on her snappy outfit as the two sip mojitos poolside at Mandalay Bay. At the Hard Rock, Michael Bisping - wearing a bell hop uniform circa 1920 - delivers the luggage of an elderly couple from Wisconsin to their room.

"Guys, we have to stop sucking," says the Queen of England (also known as "Dan" - still no explanation why) to her Team America: World Police charges. Since there are still castmembers with no interesting backstory whatsoever, another fight is arranged for the episode - the Marquis de Johnson against the British Mr. T. Again, there is zero build-up. One minute their match-up is declared, the next they're in the cage.

Meanwhile, Matt Damon trades witty banter with Brad Pitt. Token Asian dude and old man pop out of a box and release fleas into a hotel room in the Luxor. Michael Bisping finds himself within a casino vault, decked out in SWAT gear and talking to Andy Garcia on a cell phone. "Awright geeza! So, I loved winnie da pooh in da 'Godfarfer', but Lord Fauntleroy did Sophia Coppola stink. Sorted mated." Like most humans, Andy Garcia can't understand a word Michael Bisping says, and in frustration he throws his cell phone on the floor and smashes it repeatedly with his cane. The Brit leaves the casino vault with bags of money tucked under each arm.

"In nine seasons of 'The Ultimate Fighter' a coach has never missed a fight," says Dana with a grin. The camera pulls back, revealing him to be surrounded by piles and piles of money. 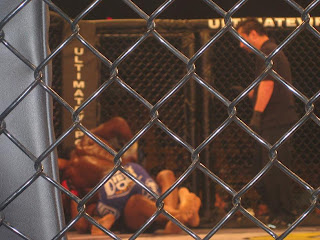