I Bet You Didn't Know Referee Keith Peterson Used to Fight, Did You? 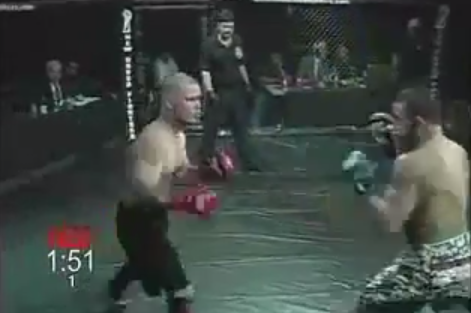 You've seen him referee UFC bouts, and you probably noted him for his tattoos and thought that he'd either played in a hardcore band at CBGB's or killed people in the mosh pit. But what you likely didn't know about Keith Peterson is that he used to fight.

Throughout 2007 and 2008, Peterson - who calls Long Island home and has long been a licensed official with the New Jersey State Athletic Control Board - competed in Combat in the Cage, New Breed Fighters and Asylum Fight League. He even had a nemesis of sorts in the form of Tiger Schulmann fighter Jose Villanueva, with Peterson and Villanueva fighting three times.

Below is one of their bouts. Watch it, and keep it in mind the next time you see him officiating a bout on pay-per-view, SpikeTV or wherever.

Funny how you say someone might think he was in a hardcore band... For those unaware, Keith was the frontman for GFY and Losers Sometimes Win :)

Well. It is not surprising that he decided not to leave the fighting industry and occupy a niche of the referee. As can be seen from the video, he is a pretty good fighter and is well known in this. And it needs a referee.

This is complete trash .. I’ve known him over 30 years .. he is happily married to his beautiful wife for about 20 years or so , and his wife is at every show .. this is a complete shit post