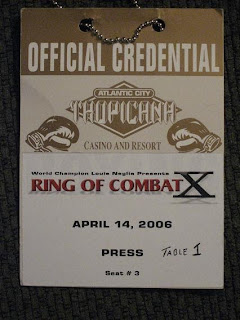 A Side of Crazy

This just in from that guy that spoke out at the World MMA Expo's "Future of MMA in New York" panel discussion:

"First off I'm no lunatik. I have been involved in martial Arts since 1979 and been a member of KS Lions Den for 11 years. If you payed any attention it was the fact that Dana White was NOT treating his fighters with any regard.Mikey Burnett has been a part of the UFC since the Beginning and now has a broken neck due to injury on TUF 4 which Zuffa is not owning up to.You must of been the JOKER I told to PIPE DOWN.

Eric Nyenhuis"
Posted by Jim Genia at 1:51 PM No comments: